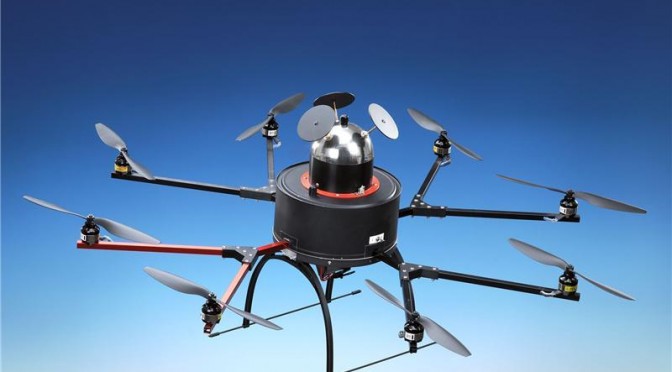 The octocopter follows a pre-defined route by means of a ground marking system. The autonomous measuring probe which is mounted on the octocopter is equipped with three antennas arranged at right angles to one another, and with its own GPS receiver. The integrated microprocessor processes the data flow of the three-channel HF receiver as well as the GPS position, records these data in real time and provides them with a timestamp. The measured data can be evaluated at any subsequent moment. 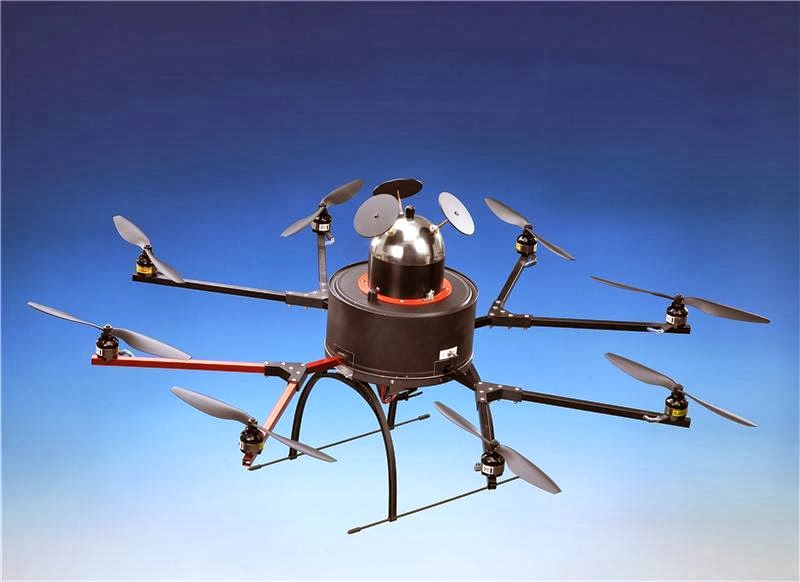 Researchers from the Physikalisch-Technische Bundesanstalt (PTB), together with FCS Flight Calibration Services GmbH from Braunschweig, have developed a measuring system which, hanging from a helicopter, detects the electric field strength as well as the signal contents of air-traffic control navigation systems with unprecedented accuracy. They had hardly developed this system when a future potential application field of an extended hovering facility was found: the evaluation of recorded measurement data could be used already in the planning phase of wind farms to find out to what extent the planned wind farms would influence the operation of neighbouring radar facilities used for air-traffic control, aerial defence or meteorological observations. A miniaturized — and still strongly simplified — version of the measuring arrangement has already made its first test flights on an octocopter.

Sometimes, societal and political developments evolve as competing projects: on the one hand, the “Energiewende” (energy transition) leads to numerous wind farms being erected, on the other hand, the radar surveillance systems used by meteorologists, air-traffic control and aerial defence ensure safety. The problem is that radar waves are scattered when they hit the rotor blades of windmills in a large wind farm; they can interfere with the wanted signals to such an extent that the sensor provides erroneous information. Quite a few wind energy projects have currently been put on hold because the operators of neighbouring radar facilities are often no longer willing to accept external experts' opinions based on pure simulation models as the proof of the undisturbed coexistence of the two technologies. This is due to the fact that the simulation of the wave propagation requires numerous assumptions which could to date not be verified by measurements, so that interactions with wind farms can no longer be assessed with sufficient safety and certitude. This is where the new system developed by PTB and FCS Flight Calibration Services GmbH comes in: it is able to provide the underlying data for simulation models and thus help experts derive more reliable predictions from improved models for the authorities issuing the authorizations.

The core piece of this technology is a jointly developed antenna and receiver system. In its previous design, it hangs down from a helicopter and can measure the electromagnetic field strength at any random location in space and save the measured data as well as the exact location (GPS supported by EGNOS) with a very high sampling rate in real time. Successful tests have already demonstrated that this system is capable of measuring the electromagnetic far field which is necessary for a flawless signal transmission (e.g. between an instrument landing system and an aircraft) as precisely as required by the International Civil Aviation Organization (ICAO). The measurement is traceable to the International System of Units (SI) — i.e. the highest possible standard — which ensures its comparability. No one in Europe had ever achieved this before.

Thorsten Schrader (Head of PTB's “High Frequency and Electromagnetic Fields” Department) and his research colleagues and partners have now miniaturized this antenna system to fit it onto an octocopter (i.e. a miniaturized helicopter approx. 80 cm wide and equipped with 8 rotors). On such aerial vehicles, it might soon be possible to use the sensor at places where wind farms already exist or where they are planned in order to acquire data with regard to the field strength and to modified signal contents at any selected coordinates over any random periods. The researchers intend to use it in a first step to metrologically detect the real-time dynamic change in the electromagnetic wave propagation caused by wind farms, to analyze it and feed it into a (preferably) simple model of the electromagnetic data transmission channel.

The innovative approach provided by this project (WERAN — German acronym for “Interaction between wind farms and radar/navigation”) consists in dividing the complex estimation of the disturbances caused to radars by wind farms into metrologically detectable intermediate steps and in comparing only compatible quantities from numerical simulations and measurements with each other. The project is funded by the Federal Ministry for the Environment, Nature Conservation and Nuclear Safety (BMU). PTB's research partners are the enterprises FCS and “steep” as well as the Leibniz Universit