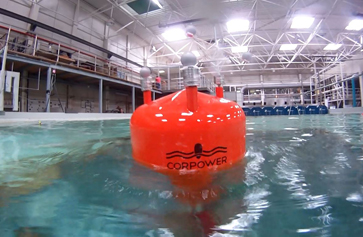 IBERDROLA INGENIERÍA, in partnership with the Swedish company CorPower Ocean specializing in wave energy converters and the Portuguese marine research centre WavEc, has embarked on the development of the R&D project HiWave, focused on high efficiency wave power.

This international initiative aims to demonstrate wave power harnessing using a new type of compact device with advanced control technology and subsequently design an offshore farm based on this technology.

Within the framework of this ambitious project, CorPower will be responsible for designing the device, IBERDROLA INGENIERÍA will be in charge of developing the offshore farm, and WavEc will provide analysis and validation support during the various stages.

Expected to be completed in 2016, HiWave has a budget of €15 million and it is one of the most important initiatives of its kind in the field of marine energy.

This project is partly funded by the European Institute of Innovation and Technology (EIT) through one of its knowledge and innovation communities (KIC InnoEnergy).

The initiative shows the Group’s firm commitment to the promotion of R&D. IBERDROLA INGENIERÍA is currently working on projects in the areas of renewable energy, energy efficiency, nuclear fusion, gaseous pollutant capture and smart grids.

Moreover, the IBERDROLA Group is a pioneer in marine energy harnessing initiatives. The core of its business in this sector is offshore wind power, where it is already carrying out projects totalling over 8,000 megawatts (MW).

Commitment to the various types of marine energy

IBERDROLA is also promoting projects based on other marine technologies: wave and tidal energy. As regards wave energy, the Company is building a plant using the Pelamis P2 technology. Pelamis P2 is a snakelike infrastructure capable of absorbing wave energy and turning it into electricity through a series of hydraulic cylinders.

As for tidal energy, it is partnering with the Austrian company Andritz Hydro Hammerfest and the French corporation Alstom in a project totalling up to 10 MW in the Sound of Islay, in Scotland, which will include devices similar to an onshore wind turbine, but using ocean currents instead of the effect of the wind.

These two plants are being developed at the European Marine Energy Centre (EMEC) on the island of Orkney, in the north of Scotland.