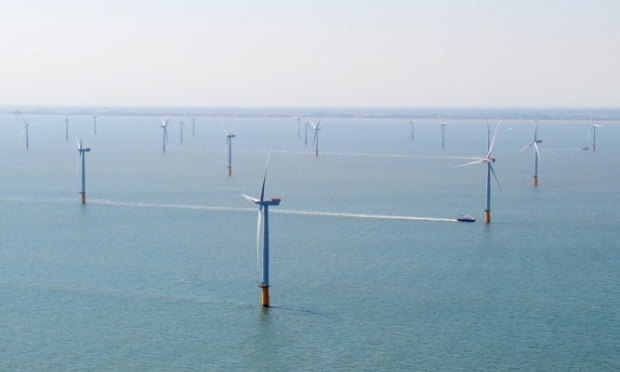 At beginning of the week, RWE Innogy has started laying the first inter array cable in the construction area of the Nordsee Ost offshore wind farm. By mid-2014, 64 kilometers of cable will have connected the 48 wind turbines with the offshore transformer substation. The Dutch company Visser & Smit Marine Contracting (VSCM) is leading this work.

Marcel Sunier, the Nordsee Ost project director explains: “Until now 24 of the 48 foundations for the wind turbines have been successfully installed. Because of this we can now start with the cable laying process. First the cables are placed on the sea bed by the cable-laying vessel Normand Flower and later they are buried by the “Deep Cygnus”. As soon as the remaining foundations are installed, this work will be repeated until we have finished the complete inter array cable laying process by next summer.”

All 48 wind turbines of the Nordsee Ost wind farm will be connected via the so-called inter-array cables and then to an offshore transformer substation – the wind farm’s nerve centre.
This is where the 33 kV power generated by the wind turbines is converted into a transmission voltage of 155 kV.

The 33 kV submarine cables have a diameter of up to 16 cm. An extremely robust coating protects the high-performance electricity connectors from extreme conditions, which, in particular, may occur during High Sea installation procedures. At the same time, they guarantee maximum energy transmission over large distances.

Once complete, Nordsee Ost will have an installed capacity of 295 Megawatts and will be able to supply the equivalent of approximately. 310,000 German households annually with climate-friendly electricity. Equipped with the currently most powerful turbines, Nordsee Ost is one of the largest commercial wind power projects off the German coast.