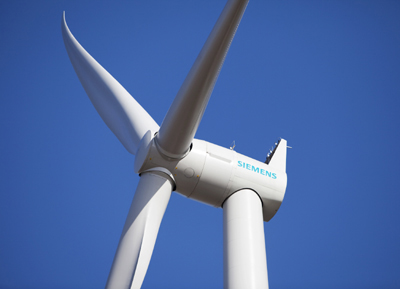 76 Siemens direct drive turbines for Vattenfall wind power project in Wales. Wind power plant with 228 MW will supply energy for around 140,000 homes. Siemens will also provide service and maintenance for a five year period.
Siemens has been chosen to supply, install and service 76 direct drive turbines at Vattenfall’s onshore wind farm “Pen y Cymoedd” in Wales. The wind power plant will be developed in the coastal mountain range between the harbour city of Port Talbot and the county borough of Rhondda Cynon Taf. The developer, Vattenfall, has contracted Siemens Wind Power to install 76 of its innovative SWT 3.0 direct drive wind turbines. The wind farm, with a total capacity of 228 megawatts (MW) will be the largest project with gearless turbines erected in Wales. It is also the largest ever-contract for the Siemens 3-MW-direct drive turbine signed to date in the UK.
First power at the “Pen y Cymoedd” wind farm is scheduled for late 2016, and will, on average, supply the equivalent electricity demand for up to 140,000UK households. Siemens was also contracted to provide the service and availability contract for the maintenance of the wind farm for five years after the plant has become operational.
The project will bring significant benefits to the local community and supply chain, especially during construction and also in the long-term servicing of the wind farm. Vattenfall will make use of local suppliers where possible and is committed to enhancing the local environment by developing a network of mountain bike paths throughout the wind power plant.
Vattenfall’s Director of Onshore Wind Development in the UK, Piers Guy, said: “Vattenfall is pleased to have signed up with Siemens and placed such a significant order for its direct drive turbine. In addition, it is important for Vattenfall that we contract with main suppliers that are committed to working with the local supply chain for installation, operations and maintenance and so maximising local economic benefit. We expect Siemens to do that.”
“The Pen y Cymoedd project is of special significance to us not only on account of its magnitude”, states Jan Kjaersgaard, CEO of Siemens Wind Power in the EMEA region. “The project will contribute to the Welsh Government’s renewable goals.”
Siemens already plays a significant role in Wales’ low carbon economy. Developments include the Maerdy and Mynydd y Betws onshore wind farms and Rhyl Flats and Gwynt-y-M