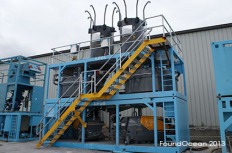 FoundOcean is the world’s largest dedicated grouting contractor for the energy construction industry. The company has been applying its 50 years of oil and gas experience to the offshore wind sector since 2003.

Standard-strength grout projects make use of a high-speed Recirculating Jet Mixer which is fed with cement from bulk storage silos. Because of the UHS grout formulation, silos cannot be used to store and transport the material, meaning individual big bags must be individually loaded into the mixer by crane, which is a slower process.

FoundOcean’s new Super Pan Mixer will enable UHS grouting for monopile transition pieces to be completed in half the time of its own previous model and its competitors’ mixers. The new mixer’s configuration means that larger volumes of grout can be produced by mixing larger batches, which reduces the number of crane movements, and by simultaneously loading, mixing, and pumping grout. It is the first mixer on the market with an UHS grout output rate exceeding 10m3 per hour.

FoundOcean has invested nearly £1m in the design and construction of its new mixer: Two are already in use at the 108-turbine West of Duddon Sands offshore wind farm, and a third is being mobilised to Energy Park Fife in the coming weeks, to grout the foundations for Samsung’s record-breaking 7MW turbine. Both projects are using BASF’s MasterFlow 9500 UHS grout. The third Super Pan is the latest mixer produced by FoundOcean and is the 40th in its expanding line of grout mixing equipment.