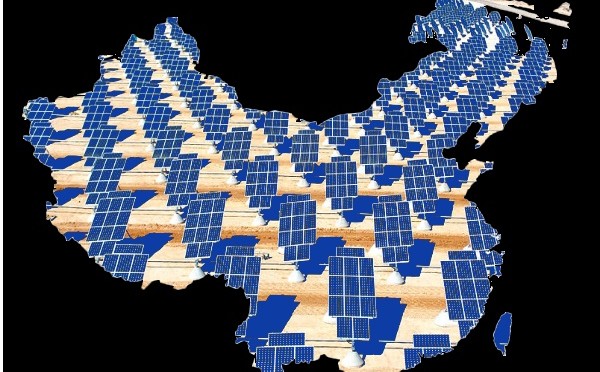 China is aiming for a fivefold increase in solar power generating capacity by 2015 to shore up domestic solar panel makers that are struggling with overcapacity.

The country aims to install about 10 gigawatts of solar capacity annually from 2013-2015, bringing the total to more than 35 GW by the end of 2015, according to a State Council statement posted on the central government’s website yesterday.

The 35 GW target, which has been previously revealed by senior energy officials, is higher than the 21 GW target announced by the National Energy Administration last year.

Boosting the domestic market will help Chinese solar panel makers, the world’s No. 1 producers, to cut their reliance on foreign markets at a time when trade disputes with Europe and the US are hitting China’s exports.

The State Council, the country’s Cabinet, also said that China will encourage mergers and acquisitions in the domestic industry and urged banks to provide credit support for big and efficient solar panel producers.

The State Council also said it will improve tariff and subsidy systems to allow better investment returns for solar projects. No details were given.

During the second half of 2013, global solar photovoltaic demand is forecast to reach 20GW, up 22 percent from a year earlier, according to consultancy NPD Solarbuzz. That will be driven largely by aggressive development in China and Japan, which together are forecast to account for more than 45 percent of global demand in the second half.

The share of Europe, where governments have been scaling back on subsidies for solar power, will decline to less than 30 percent from almost half the global demand during the second half of 2012.

“The solar PV industry continues to transition from a European-dominated environment to a global market, with a wide range of countries contributing to growth in the overall PV market,” said Michael Barker, senior analyst at NPD Solarbuzz.

The sector has been hit hard by the excess capacity, falling government subsidies and trade disputes. Manufacturers have been hemorrhaging cash and struggling with mounting debts as panel prices have fallen by two thirds over the past couple of years.

The US last year slapped anti-dumping duties on solar cells imported from China. The EU has also imposed duties that will jump to punitive levels next month.

China’s dominant power distributor State Grid Corp has been holding back from purchases of electricity from wind and solar farms due mainly in part to concerns that the intermittent sources would disrupt its networks.