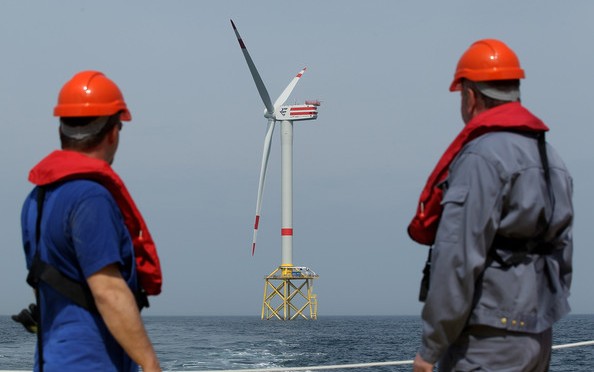 The Scottish government has approved an offshore wind power project that has drawn the ire of Donald Trump, who owns a luxury golf resort nearby.

The American tycoon said Tuesday he would bring a lawsuit to stop the 230 million-pound ($349 million) development, which consists of 11 wind turbines planned off the coast near Aberdeen in northeastern Scotland.

Trump bought land north of Aberdeen in 2006 for the sprawling resort, which opened last summer despite strong local opposition. He was due to add a luxury hotel to the site, but he has said he will not continue until the wind farm project is rejected.

Trump himself has been criticized by local residents and environmentalists, who protested that his golf resort threatened the coastal sand dunes and wildlife in the area.

The 11 wind turbines, which have been reduced in number and location after objections from fisheries and aviation interests, are expected to be of different heights and designs.

The wind energy project, owned by the Swedish power giant Vattenfall and a local business and university consortium, still needs marine consents and planning consent for an onshore sub-station.

Iain Todd, a spokesman for the project, made this clear, stating: “The Scottish government’s most welcome approval for the EOWDC is extremely positive news for both Scotland and the UK’s offshore wind industry as it helps position Scotland, the UK and Europe at the global vanguard of the sector.

“The decision also confirms Aberdeen city and shire’s status as a world-class energy hub, bringing with it significant economic benefits which will be pivotal to ensuring the region’s long-term prosperity.”

Richard Dixon, director of Friends of the Earth Scotland, said: “Offshore wind will be a huge part of our energy future and this scheme is a big step forward.

“Well done to the Scottish government for standing up to Donald Trump’s threats and bluster.”