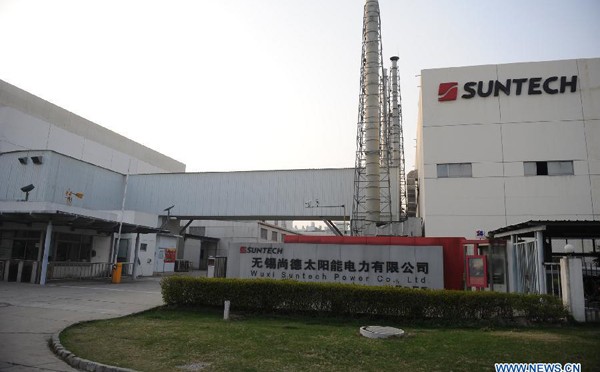 On Wednesday, the Wuxi City Intermediate People’s Court approved the company’s bankruptcy and ruled that it was undergoing “bankruptcy reorganization.”

The announcement came two days after Suntech said it had defaulted on a 541 million U.S. dollars bond payment.

“The key reason lies in global overcapacity,” noted a member of the bankruptcy liquidation team, adding that the company was defeated in the fierce price war.

As a major subsidiary of the Nasdaq-listed Suntech Power, Wuxi Suntech was once one of China’s four largest solar module makers.

The company has been hard hit by shrinking global market for solar cells and panels as well as by punitive tariffs with the United States and Europe over alleging that Chinese dumping and government subsidies to producers.

According to a senior company manager, the company’s credit balance for the local and foreign currencies of the creditor banks totaled 7.1 billion yuan (1.14 billion U.S. dollars) by the end of February.

The banks expected the company to seek a third party for strategic reorganization in order to revive the company, the manager added.

Besides, sources revealed that the Suntech founder Shi Zhengrong, who was ousted from the position of chairman of board earlier this month, had the support of the Wuxi government and could return to the company as part of the reorganization, according to the 21st Century Business Herald.

Some experts thought that was a wise move for the bankruptcy of Suntech.

“It’s a reasonable option for all the parties involved, including Suntech, the local government and its creditors,” said an industry insider. “People don’t know how much more money would have to be injected into the company to keep it afloat.”

“The local government might play the savior role, but it will definitely raise public doubts whether it’s worthwhile to do so,” said Ren Dongming, director of the Center for Renewable Energy Development of the National Development and Reform Commission’s Energy Research Institute.

“However, neither the local government nor any person can save the company if there’s no market for its products,” Ren added.

As the bellwether of China’s solar industry, Suntech is not the only enterprise which struggled for survive in the global recession. And its fall indeed rang the alarm bell for the whole sector.

Qu Xiaohua, chairman of Canadian Solar, one of the world’s largest solar companies listed on Nasdaq, said the bankruptcy of Wuxi Suntech was a dangerous signal of operational losses for PV firms.

“The company was a respected competitor. Their products are among the world’s highest in both quality and performance,” said Qu, adding that a series of bad decisions led the company to bankruptcy.

Now the PV companies in China all face similar problems of haphazard investments and excessive production capacity. The high reliability on overseas market is counted as a major reason that dragged China’s solar industry into danger.

The country’s major solar panel producers, including Yingli Green Energy Holding Co,Trina Solar Ltd and LDK Solar Co, decided to expand their production capacities to increase their market shares in the past years.

In wake of the global economic crisis, world’s major solar markets, including Europe and the U.S., have shrunk dramatically, while anti-dumping and anti-subsidy moves targeting solar energy products have fatal impacts on the worsening solar companies in China.

It said up to 90 percent of Chinese poly-silicon makers had halted production, and 80 percent of solar panel producers had shut down or sharply reduced output.

“Most small-scale solar panel manufacturers have already stopped production due to the weaker demand,” said Wang Sicheng, a senior researcher at the Energy Research Institute.

“Downsizing production capacity is painful, but I believe more competitive companies will arise in the coming years, thanks to booming domestic demand,” said the CPIA secretary-general Wang Bohua.

China has been devoting to encourage renewable energy development to provide power for its rapid economic growth while attempting to control the growing environmental pollution.

To help companies stay afloat, the government carried out a package of measures last year to bolster the domestic solar power market.

The newly-installed capacity of energy generated by solar panels in China last year surged to 4.5 GW from 0.45 GW in 2010, and it is expected to exceed 6 GW this year.

“The government’s target to create a 10-gigawatt domestic market this year will help the industry to some extent,” said Gao Hongling, the CPIA deputy secretary-general.