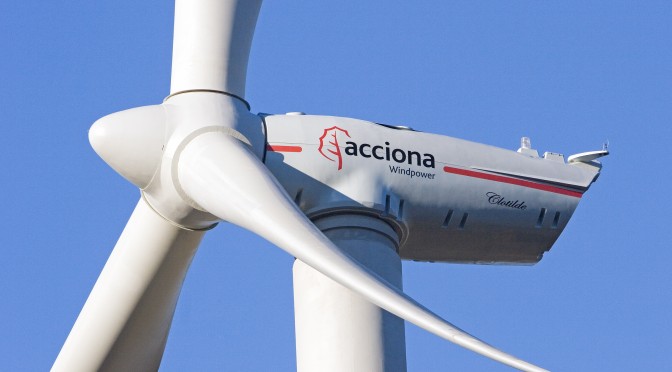 The prize recognises ACCIONA’s pioneering use of project bonds to finance wind farms in Mexico.

The placement with institutional investors potentially opens up a new market for the long-term finance of sustainable energy projects in Latin America.

ACCIONA, a global renewable energy, infrastructure and water services group, has been awarded one of Project Finance Magazine’s prestigious “Deal of the Year” awards for the pioneering use of long-term project bonds to finance two wind farm developments in Mexico.

In August 2012, ACCIONA raised $298m in a private placement of project bonds to finance its Oaxaca II and IV wind farms, each with a capacity of 102MW. The 2031 notes, with principal amounts of $148m and $150m, carry a 7.25% yield. These placements marked the first time ACCIONA funded wind farms through long-term bonds, underscoring the Company’s position as a pioneer in the development of renewable energy projects.

The placement of project bonds represented a big vote of confidence in ACCIONA’s technology, leadership and strong track-record in the renewable energy industry. It also allowed ACCIONA to diversify its sources of finance for long-term clean energy infrastructure projects.

The issuance also marked the first project bond placement of its kind in Latin America, potentially opening up a new market for the long-term finance of sustainable infrastructure projects in the region.

In awarding ACCIONA the “Latin American Project Bond Deal of the Year 2012”, Project Finance Magazine said: “ACCIONA’s Oaxaca projects were probably the best candidates for the first Mexican renewables issues. ACCIONA is the most accomplished wind developer in Mexico.”

The Oaxaca II and IV wind farms, each with a capacity of 102 MW, entered into operation in February and March 2012. The two wind-farms have long-term contracts to supply clean electricity to Mexico’s Federal Electricity Commission. ACCIONA is a renewable energy leader in Mexico, with a total wind energy capacity of 556.5 MW in operation. ACCIONA is committed to developing new renewable energy projects in Mexico – for itself and for third parties – to help fulfill the country’s clean energy potential.