“A wind turbine represents modernity. So, they want this in their community. Hey we are modern, they say. This is latest technology and we are independent, from Burmese gas and from imported oil. Our energy is produced here with our own resource – that is wind – zero emissions and we are proud of it,” Nick Suppipat said.

Nick Suppipat and the company Wind Enterprise Holdings have recently completed the largest wind farm ever in Thailand. The 207 MW wind park is built in the Nakhon Ratchasima district. It is a significant step for the fledging wind industry in the Thailand and an example of how sustainable development can be a win-win.

Seven years ago, oil prices were skyrocketing and Thailand was in the midst of a financial crisis. Nick, an investor since he was 17, was convinced that renewable energy would be the next big thing and figured that wind was going to take the biggest share of that. For him, the business case made sense and he jumped in.

“So I started looking for an appropriate site. At the time according to local research, we didn’t have wind resource. So I took a serious look into that research and found out that it is not 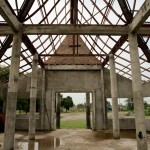 A temple in the Nakhon Ratchasima district

Nick hired an American company to develop a high resolution wind map and discovered that Thailand did have some wind resources, not as good as some European countries, but enough for modern wind turbines. Since then, the business has grown quickly and beyond his expectations. Six years ago he wouldn’t have dreamed of 200 MW. Now they have 207 MW in operation and have their sights set on further growth and expansion internationally.

Nick believes that with the current tariff there is 2,000 – 3,000 MW feasible in Thailand for wind farm development. It is important to remember that the number of households this will provide energy for is many times greater than in higher energy consumption areas of North America or Europe. (WorldBank statistics show the 2010 electric consumption per capita (kWh) in Thailand was 2243 kWh compared to Belgium at 8387 kWh or the USA at 13,394 kwh.) 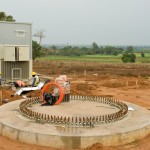 From their office on the top floor of a Bangkok skyscraper, it may perhaps be easy to forget about the farming community directly affected by this development. But Nick and his team have made community development a key aspect of their business.

“We want to make a difference in the area. We don’t want to make money and then not care about people around. We want to ensure that their lives improved and the area becomes a model community,” says Nick.

When asked if there has been any objection from the community. “None, zero,” says Nick. “That surprised me. I never heard anyone complain or think it is ugly or think that it is un-cool.”

Around the newly developed wind park are visible examples of how this wind farm is positively impacting the community. The temples are being fitted with new roofs or renovated entirely. The roads, which were once impassable in the rainy season, have been rebuilt, reducing transport costs, time and headaches for the farmers. Additionally, a policy to hire local people and contractors has ensured valuable employment for hundreds if not thousands of Thais. Nick estimates that over 15,000 people have or will directly benefit from this project. 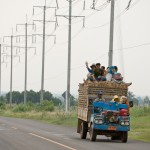 A truck full of farm produce

By the end of 2018 Wind Energy Holdings expects to have over 750 MW operating in Thailand. After that, they are looking internationally and if this same model of development continues, it will mean win-win for communities and for business.