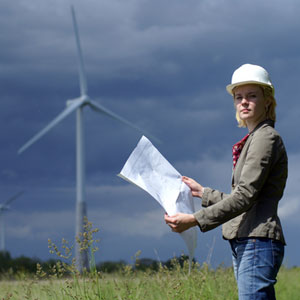 In honor of Women’s History Month, we’d like to take a moment to highlight just some of the many talented women leaders in the wind energy industry.

Without these women leading the way, wind power would not be where it is today. We look forward to future generations of women helping to grow wind power in America.

·       Susan Reilly – Susan is President and CEO, Renewable Energy Systems Americas (RES). RES is a renewable energy company, with more than 300 full-time staff, that develops, constructs, owns, and/or operates projects across North America. Susan is also an active member of the American Wind Energy Association’s board of directors.  Since 1998, Susan has been a leading developer of renewable energy activity in the U.S. Before joining RES, she spent 13 years with Scottish Power/Iberdrola, holding a number of senior positions.

·       Abby Arnold – is the Executive Director of the American Wind Wildlife Institute (AWWI) and Vice President and Senior Mediator of the DC-based firm Kearns & West. AWWI is a science-based organization created by people who care about renewable energy and the environment: conservationists, state wildlife officials, wind energy leaders, and scientists. Recently Abby joined the Women of Wind Energy (WoWE) Board of Directors and was honored as WoWE’s 2010 Woman of the Year.

·       Beth Soholt – Beth is Executive Director of Wind on the Wires (WOW) and was WoWE’s 2011 Woman of the Year. Launched in 2001, WOW is AWEA’s key regional partner in the Midwest and covers nine states in the Midwest Independent System Operator (MISO) footprint. Starting with only several hundred megawatts of wind more than 10 years ago, the WOW footprint currently has over 12,000 megawatts of wind spinning. At WOW, Beth directs work in the areas of technical and transmission planning, state regulatory proceedings, legislative education and outreach.

·       Nancy Rader – Nancy has over 20 years of experience in the wind power industry. Nancy is the Executive Director of the California Wind Energy Association (CalWEA). CalWEA is a nonprofit corporation seeking to encourage and support wind power throughout California, supported by members of the wind energy industry. Nancy played an important role for the American Wind Energy Association (AWEA) from 1994 to 1998 as AWEA’s West Coast Representative and policy advisor, when she developed and advocated the Renewables Portfolio Standard policy, since adopted in over 25 states.

·       Jan (Blittersdorf) Blomstrann – Jan has been chief executive officer of NRG Systems, a manufacturer of wind measurement systems for the global wind energy industry, since 2004. Under her leadership, the company earned ISO 9001:2008 certification for its quality management system, joining a select group of American businesses that meet stringent international standards for quality. Jan’s focus on workplace excellence and sustainability has created a vibrant organization that has been recognized by business groups across the nation. Jan has been active in the wind energy industry for 25 years. She serves on the board of directors for AWEA, the American Wind Wildlife Institute, and WoWE, and was the first recipient of WoWE’s Woman of the Year award.

·       Rachel Shimshak – Rachel has served as the Executive Director of the Renewable Northwest Project (RNP) in Portland, OR, since its inception in 1994. Under her leadership, the organization has supported more than 7,0000 MW of wind and other renewable energy resources in the Northwest region. Rachel was WoWE’s 2008 Woman of the Year.

·       Karen Conover – Karen founded Global Energy Concepts, which grew to a staff of 100 employees in 2008 before being acquired by DNV. Karen has worked on wind energy in the U.S. and in over 20 countries for over 25 years. She now serves in a strategic role for DNV KEMA Energy & Sustainability. Karen was one of the first women and youngest persons ever appointed to the American Wind Energy Association’s board of directors. Karen won the 2012 Britt Theismann Wind Energy Person of the Year award, as she consistently demonstrated strong leadership and overall excellence while representing the wind energy industry.

·      Lori Rugh – Lori is the Senior Director of Marketing & Sales for the American Wind Energy Association. Lori has worked in the wind industry for 15 years starting with a tenure at Zond, Enron Wind, then GE Wind Energy, and has an extensive background in marketing for the wind power industry. Working through the challenges of the industry and bringing it to the forefront of the news, changing perceptions of the industry from alternative to mainstream energy source and capturing acceptance on a grassroots level. At AWEA, Lori brought a breadth of manufacturing segments and international involvement to the overall industry which resulted in the extensive growth of the association and its membership base.