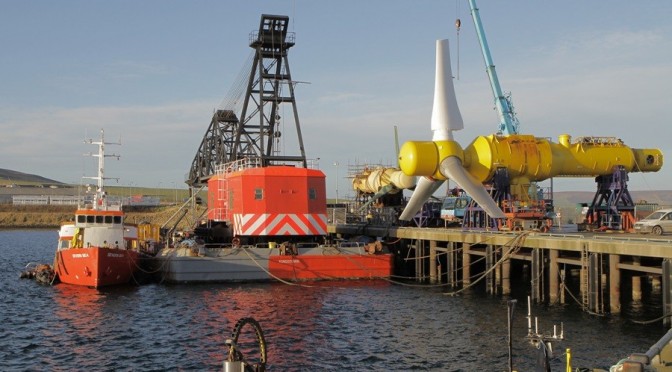 After the successful test of its 500kW device, it is the second Alstom tidal turbine generating power to the grid. This milestone positions Alstom at the forefront of the tidal technology developers.

500 kW and 1 MW variants of the tidal stream turbine have already been subject to extensive testing, with the latter currently in situ Scotland, as part of the Energy Technologies Institute (ETI) commissioned and co-funded ReDAPT (Reliable Data Acquisition Platform for Tidal) consortium project.

Detailed testing and analysis in different operational conditions off Orkney will continue throughout 2013 over an 18 month period, in order to further improve tidal power technology. The next step is to install pilot arrays prior to full commercial production.

“The first generation from the 1MW turbine is a major milestone as we move forwards in commercialising the technology and continuing to learn about the marine environment in preparation for commercial tenders in France and the UK.” said Rob Stevenson the Vice-President of Alstom Ocean .

Alstom’s tidal turbine consists of a three-bladed, pitch-controlled rotor, with a diameter measuring 18 metres; a standard drivetrain and power electronics inside the nacelle. The 22m long nacelle is installed onto a separate seabed-mounted foundation and weighs less than 150 tonnes. This tidal stream turbine has a number of notable features: First, it is simple, and easy to transport. Its buoyancy means that it is easily installed and retrieved in a single tidal cycle using small vessels, reducing installation and maintenance costs. Secondly, it has an intelligent nacelle. Thrusters rotate the nacelle to reflect the direction of the tide, managing ebb and flood tides seamlessly as well as maximising energy production. Thirdly, with its efficient blades, turbine blade pitching can be altered to control load on the turbine and optimise use of the tidal conditions locally.