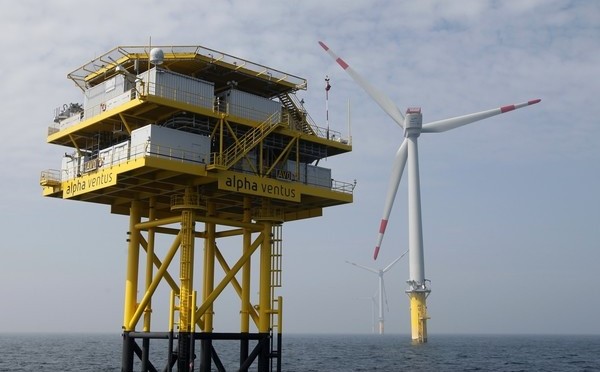 This project connects the North Sea wind farms to the mainland supergrid and has an investment volume of more than €1 billion.

“With this project, we help to take the energy turnaround another step forward and make it possible for offshore wind energy to make an important contribution to our future energy supplies“, says Lex Hartman, member of the board of TenneT.

“With DolWin3 included, we will be able to supply a total of more than 6,000 MW of clean energy from the North Sea – and we will be investing more than €7 billion in the energy turnaround.”

DolWin3 is the eighth grid connection project to be implemented by TenneT using direct current technology. Together with three projects based on AC current technology, the Transmission System Operator responsible for the North Sea will then deliver a total of around 6.2 GW of offshore wind energy to the mainland. The DolWin3 project will be the third grid connection in the DolWin wind farm cluster in the south-western region of the North Sea and will offer a capacity of 900 MW. The project will be completed in 2017.

“For DolWin3, TenneT will benefit from Alstom’s advanced technology. As market leader for offshore AC substations and onshore HVDC, we are well positioned to enter the German offshore HVDC market as a new competitor. The collaboration with Nordic Yards and Prysmian, who both have outstanding references, is key to delivering this turnkey contract,” says Grégoire Poux-Guillaume, President of Alstom Grid.

As the general contractor for TenneT, Alstom will supply and construct both the onshore and offshore converter stations as well as the connecting cable systems for DolWin3. The project will use direct current technology (with Voltage Source Converters (VSC); ±320 kV, 900 MW) to deliver the energy generated at sea down an 83 km sea cable to the mainland. From the coast, the wind power will then be transported a further 79 km via and underground cable to the converter station in Dörpen/West in Lower Saxony (Germany). The grid connection will be supplied as a turnkey solution by Alstom.

Together with the turnkey contract, Alstom has been awarded a five-year service contract covering the complete offshore converter station and platform, as well as the onshore converter system. The contract includes inspection, preventive and corrective maintenance, refurbishment and repair, spare parts management and a technology support line.

Alstom has chosen the most experienced partners on the market to complete this project, working with platform constructor Nordic Yards and cable supplier Prysmian. Both companies are highly experienced in the field of offshore work. “One of the main challenges for the future of energy grids is to transport electricity from offshore wind turbines to the onshore grid with as few losses as possible. With DolWin3, we strengthen our position as a key partner in the German energy turnaround”, says Alf Henryk Wulf, CEO of Alstom Germany.

TenneT is the first cross-border transmission grid operator for electricity in Europe. With around 20,000 of high-voltage and extra-high-voltage lines and 36 million end users in the Netherlands and Germany we are one of the top-5 grid operators in Europe. Our focus is on the development of the energy market in north-western Europe and on the integration of renewable energy sources.