A relative slowdown in new wind turbine construction in China was offset by big increases in the US, followed by Germany, India and the UK – though renewable energy as a whole has fallen.

Wind power expanded by almost 20% in 2012 around the world to reach a new peak of 282GW of total installed capacity. Of the 45GW of new wind turbines that arrived in 2012, China and the US led the way with 13GW each, while Germany, India and the UK were next with about 2GW apiece.

“While China paused for breath, both the US and European markets had exceptionally strong years,” said Steve Sawyer, secretary general of the Global Wind Energy Council (GWEC), which produced the statistics. “Asia still led global markets, but with North America a close second, and Europe not far behind.”

The UK now ranks sixth in the world for installed wind power, with 8.5GW. In Europe, only Germany (31GW) and Spain (23GW) have more. China leads the world with 77GW installed and the US is second with 60GW. 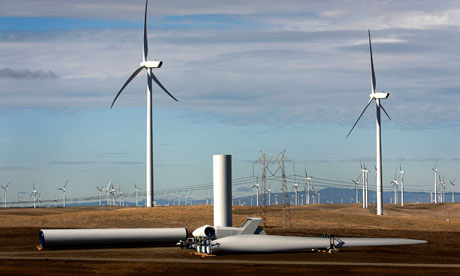 The UK is by far the world leader in offshore wind deployment, installing 0.85MW in 2012 to bring the total so far to 3GW. Denmark has a total of 0.9GW installed; Belgium is ranked third with 0.4GW.

“We are pleased to be part of this success story,” said a spokeswoman for the UK department of energy and climate change. “Wind is an important part of our low-carbon energy future. We’re also driving the technology forward with innovative 6MW offshore turbines currently being installed in the North Sea.”

The GWEC said market consolidation led to the relative slowdown in China, while “a lapse in policy” caused a similar slowdown in India, but expected Asian dominance of global wind markets to continue.

The record year for installation in the US was driven by a rush to beat an anticipated end to tax credits: 8GW of the total 13GW were installed in the last quarter of 2012. However, the tax credit has since been extended, meaning a dramatic slowdown in the US in 2013 is less likely.

GWEC said the outlook for 2013 in Europe was uncertain due to the eurozone debt crisis, but that the EU’s legal committments and 2020 targets for renewable energy ensured “a degree of stability”.

There is very little wind power installed in Africa, but sub-Saharan Africa’s first large commercial wind farm came on line in 2012, a 52MW project in Ethiopia. “This is just the beginning of the African market,” said Sawyer. “With construction started on over 0.5GW in South Africa, we expect Africa to be a substantial new market, where clean, competitive energy generated with indigenous sources is a priority for economic development.”

In January, Bloomberg New Energy Finance reported that global investment in all renewable energy had fallen by 11% in 2012, due largely to drops in government support in the US, Spain and Italy. Investment continued to rise in Asia.

In November, the International Energy Agency noted that low-carbon energy was growing quickly, driven largely by state subsidies. But the IEA highlighted that fossil fuels received six times more subsidy – $523bn in 2011, up 30% from 2010 – than low-carbon energy.