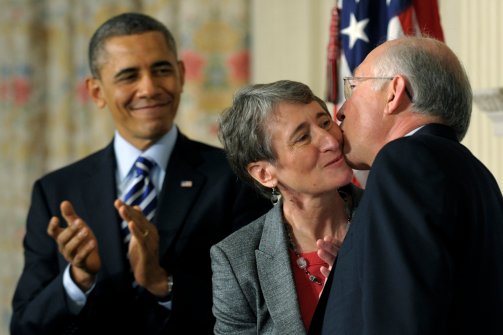 On February 6th, 2013 US President Barack Obama announced his choice of Recreational Equipment Inc. (REI) CEO Sally Jewell to lead the Department of the Interior.

If confirmed by the US Senate, Jewell will replace current Interior Secretary Ken Salazar, who oversaw a dramatic expansion of solar photovoltaic (PV) and concentrating solar power (CSP) projects on public lands.

“So even as Sally has spent the majority of her career outside of Washington – where, I might add, the majority of our interior is located – she is an expert on the energy and climate issues that are going to shape our future,” stated US President Obama.

“She knows the link between conservation and good jobs. She knows that there’s no contradiction between being good stewards of the land and our economic progress; that in fact, those two things need to go hand in hand. She has shown that a company with more than $1 billion in sales can do the right thing for our planet.”

In his speech, Obama also noted that 20% of the electricity used in REI stores comes from renewable sources, as well as the USD 4 million REI has donated to protect parks and trails.

Sally Jewell began her professional life as a petroleum engineer for ExxonMobil (Irving, Texas, US) in Oklahoma and Colorado. She has also held executive positions in three US Banks, most recently as president of Washington Mutual (Seattle, Washington, US) from 1996-2000.