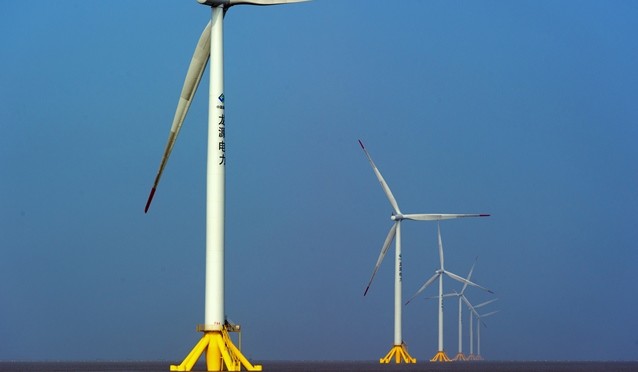 China’s wind farms are moving offshore, with the largest project going into commercial use in coastal Jiangsu province.

The 150-megawatt farm opened off Rudong county in November and will supply up to 190,000 residents with renewable energy a year, according to the China Longyuan Power Group, which runs the farm.

“It marks the country’s entry into the new era of developing large, offshore wind-energy projects,” said Zhou Qinsheng, a climate and energy expert with Greenpeace.

A Greenpeace report last year said wind energy in southeastern China can generate 500 gigawatts of power, about twice the country’s hydropower consumption in 2012 of about 249 gW, according to the State Electricity Regulatory Commission.

However, he warned wind power companies to think twice before rushing into the market because it entails high costs and demanding technologies.

He estimates that the early-stage assessment for a potential offshore wind farm takes three to five years — sometimes dozens of years — and the costs are at least double those of land projects, with additional seabed cables to be installed and high maintenance fees.

Jia Nansong, a spokesman for China Longyuan Power Group, said in November that the average cost of offshore wind power is 15,000 yuan ($2,409) a kW, about 5,000 yuan more than that generated through hydropower.

Despite the difficulties, Goldwind Group, one of China’s biggest manufacturers of wind power equipment, has stepped into the market, supplying 20 wind turbines of 2.5 megawatts each to the intertidal wind farm operated by China Longyuan Power Group in Jiangsu.

Offshore wind turbines are more demanding technically than those onshore, as they have to resist salt fog, typhoons, floating ice and other tough environmental conditions, said Ma Jinru, vice-president and secretary of the board of Goldwind Group.

“If an offshore wind turbine breaks down in strong wind, it may take days for engineers to be able to reach the turbine and fix it,” she said.

Unexpected weather at sea is a worry for Song Lili, chief scientist at the China Meteorological Administration’s Wind and Solar Energy Resources Center.

“There are extreme weather events, such as tsunamis and typhoons, that can cause severe damage to offshore wind farms,” she said, suggesting that weather reports every 15 minutes will help keep wind farms operating safely.

Although China is a newcomer to offshore wind power, it has highlighted renewable energy in its future energy map.

In the 12th Five-Year Plan (2011-15), enhancing offshore wind power projects is mentioned in the local marine economy guidance for most coastal provinces, including Shandong, Jiangsu, Fujian, Liaoning, Zhejiang and Hainan. 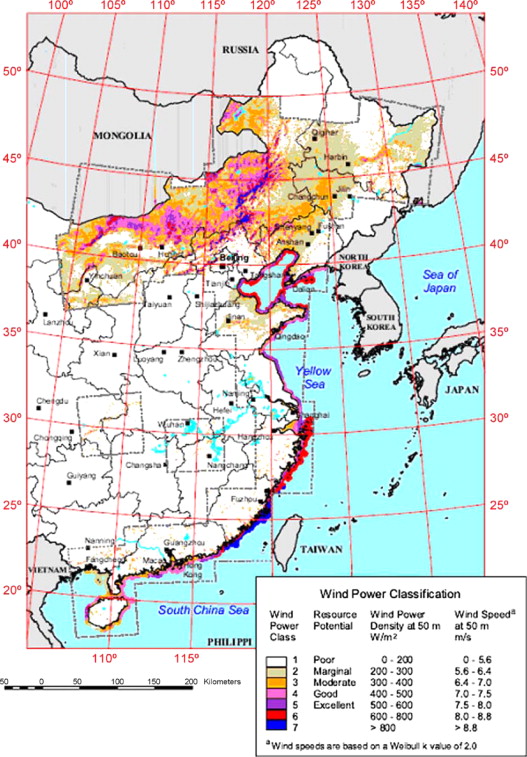 Jia, of the China Longyuan Power Group, said his company will enter the offshore wind power market in Jiangsu and Fujian.

Li Yan, who heads the climate and energy campaign for Greenpeace, said: “There is every reason that China should support wind power. Resources are abundant, production costs are being lowered and the technology is maturing, all of which make commercial development very promising.”

Many see wind energy as crucial to reducing the carbon emissions scientists believe are responsible for global warming, and it may play an important role in China’s sustainable development.

The nation put its first offshore wind power project out to tender in October 2010.

While authorities are giving the go-ahead to boost the offshore wind power market, environmentalists are concerned about the potential impact.

Greenpeace expert Zhou said this is far from sufficient, as large offshore wind farms may have side effects on wildlife, fishing and bird migration.

An official at the State Oceanic Administration, who did not want to be identified, conceded there are possible side effects, but said that before an offshore wind power project is given the go-ahead, a comprehensive environmental assessment is carried out.

By the end of 2011, China had installed a wind power generating capacity of 260 megawatts, ranking third in the world after Britain and Denmark.