Wind energy can be controversial when it comes to public acceptance, even if opinion polls show the public are largely in favour. We talk to Anna Stanford, Public Affairs Manager at RES and Lead Session Chair at EWEA 2013 in Vienna next month, to get the low-down on the issues and the solutions.

Have public acceptance issues risen over the last few years?

I’ve been working in the wind industry in the UK since 1992 and wind energy has always been controversial, polarising opinion at both a local community and national political level.  Groups set up specifically to oppose wind have been active consistently since then and have influenced politicians and the media;  ironically over the same period opinion polls have shown that public support for wind has remained consistently high.

While back then other markets did not seem to be experiencing the same level of controversy as the UK, this has changed, with anti-wind groups becoming increasingly well-organised globally and active in key markets (for example France, Canada and Australia).  In the UK, while the majority of the public remain supportive of wind energy, it remains controversial and the issue is increasingly combative on the national political stage.

Why do you think this has occurred?

This is partly due to an ideological opposition amongst some politicians and governments now in power to interventionist policies in support of renewable energy but it is also of course a result of  a challenging economic climate, in which questions are being asked about the apparent cost to consumers and taxpayers of supporting ‘green’ technologies.  The latter is relevant to most markets across Europe and worldwide.  While concerns are always raised at local level about the visual, noise or environmental impact of projects, in a time of austerity and cuts, developers can find themselves under increasing pressure to demonstrate greater economic benefit to communities who host wind farms and to bring jobs and investment benefits to national economies.

How can you involve local communities to increase public acceptance?

The wind energy industry probably does more than any other sector to engage local communities and follow good practice in developing projects.  There are many excellent examples of initiatives from developers over the years and our industry is lucky to have skilled, creative and committed PR people who go the extra mile to consult local people and engage decision-makers.  The problem is not so much winning over the public – polls show that we have done that already – the challenge is how do we motivate our supporters to vocalise their support to politicians and the media?

At a local community level we encounter a vocal minority campaigning against projects using letters to the media, press work and public meetings, while those who are supportive or are ambivalent remain quiet.  The challenge therefore is what tactics we use to mobilise the silent majority. Demonstrating direct economic benefit is useful in this regard and there are various ways that this can be done.

In the Session [at EWEA’s 2013 Annual Event taking place next month] we’ll hear examples, such as investing as part of a co-operative, and we’ll debate to what extent requiring some local content can influence political opinion. There are lessons to be learnt about a more strategic approach in engaging communities, such as educational initiatives, building links with supportive grassroots organisations and local individuals, providing the tools for them to express their support easily and effectively and ensuring that decision-makers take an true gauge of opinion, rather than just listening to those who shout the loudest.

And of course as an industry we need to consistently demonstrate good practice and corporate citizenship in everything we do and we’ll hear a good example of this from Sweden.

How can the relationship between media and wind power be improved?

There will always be anti-wind stories and opinion pieces from newspapers with certain editorial policies but that is the nature of a diverse media. Negative stories based on misconceptions or downright lies (for example about intermittency, health impacts, bird strikes, etc) have to be challenged so that they do not become established.

We must be well coordinated across the industry on our messaging, tactics and resources to ensure that we are fleet-of-foot in rebutting inaccurate stories and promoting the benefits of an industry that the public supports. 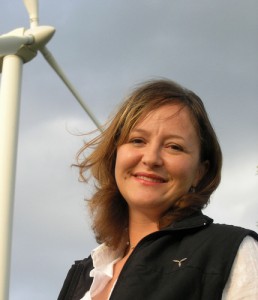 What are you most looking forward to about your session? And the event?

We have some interesting presentations covering two main themes:  what lessons we can learn about effective communications and engagement tactics and to what extent does providing direct economic benefit bring about buy-in, from both local communities and politicians. I am looking forward to practical suggestions and a lively and interactive debate from the audience, which I hope will include seasoned communications from the industry who can share their experience as well as new arrivals who want to learn some useful tips on strategy and activities.  The EWEA event is always valuable in this regard – an opportunity to catch-up with colleagues from around the world and to meet new people with new ideas.

Find out more about Anna’s session at EWEA 2013 here (Thursday 7 February, 9am).