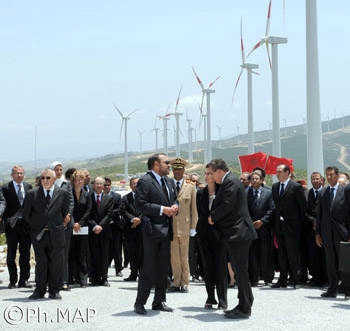 The chief executive of Abu Dhabi- based environmental city Masdar said Sunday that he has signed a framework agreement with Morocco’s minister of energy, mines, water and the environment to cooperate in renewable energy solutions.

Dr. Sultan Al-Jaber said that he signed the agreement during the 6th World Future Energy Summit held from Jan. 15 to 17, adding that the Kingdom of Morocco was an ideal partner for Masdar.

For his part, the Moroccan Minister Fouad Douiri said Morocco, which focused on the development of its renewable energy, sees the benefits in building a valuable cooperation with renewable energy players, adding that Morocco plans to invest 20 billion U.S. dollars in renewable energy solutions by 2020.

Masdar, the home of seven percent of the world’s known oil reserves, owned by the Emirati sovereign wealth fund Mubadala, aims to promote sustainability by promoting the use of renewable energy like solar power, wind energy or bio-thermal heat.

Masdar is partly finished, partly under construction which aims once completed by 2025 to host 45,000 residents living without using fossil fuels and without polluting air with carbon-emissions and without producing disposable garbage.

Masdar attracted global technology companies like Siemens, General Electric or Hitachi which do research and development in the field of renewable energy there.