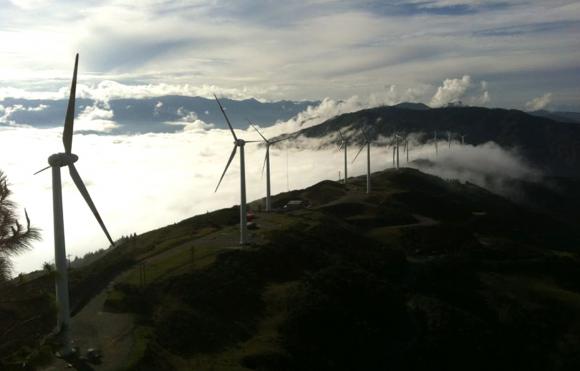 The wind farm is made up of 11 wind turbines with a total output capacity of 16.5 MW, a substation to step up power from 34.5 to 69 kilovolts, and a subtransmission line that links the Villonaco substation to its counterpart in Loja, which is on Ecuador’s national power grid.

Ecuador’s Villonaco wind farm project, located in the province of Loja, is considered emblematic of the government of President Rafael Correa Delgado, himself a former economist. Morevoer, it is the world’s highest wind power structure, built some 2,720 metres above sea level.

On Wednesday January 2, 2013, President Correa refused to officially open the Villonaco wind farm, branding it incomplete because it does not have an access road.

The wind farm was set up by the Chinese company Xinjian Goldwind Science and Technology and will cut CO2 emissions by as much as 35.270 metric tons a year.

It will also reduce diesel imports, the fuel needed to generate thermal electricity. As Correa points out on Ecuador’s Ministry of Tourism website, “We would save almost USD 13 million per year in fuel costs alone.”

Ecuador’s electrical company CELEC is in charge of the infrastructure, with an investment of USD 36 million. The benefits are myriad, especially in terms of the environment insofar as the project will reduce toxic emissions in the atmosphere; in economic terms, it will satisfy 25% of the annual energy consumption of the province of Loja.

The wind power project will also cover 68,7% of the demand currently handled by the Empresea Eléctrica Regional Sur, the company that provides power to the provinces of Loja, Zamora, and sections of Morona Santiago.

An additional advantage is that it will generate some 90% of local jobs, direct and indirect employment of 257 and 760 posts respectively. It also promises to be an important tourist attraction, with an information centre open to locals and visitors from farther afield.

During his January 2 visit to Loja, however, the president declined the opportunity to inaugurate, among other projects, the Villonaco wind farm, characterising it as incomplete because of the poor state of its access roads.