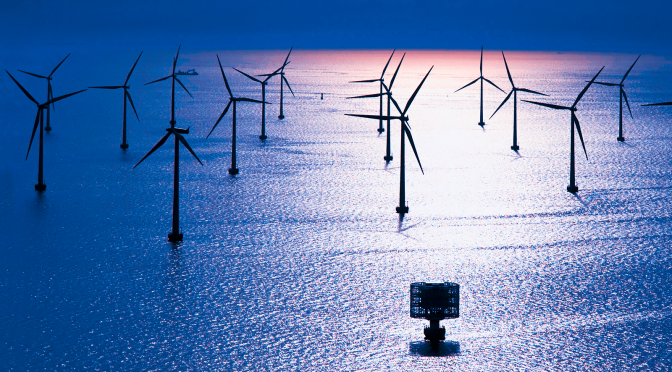 Ambitious plans for a new wave of giant offshore wind farms in UK waters have taken another step forward today, with the submission of a planning application for a new 1.2GW development off the coast of Anglia.

Joint venture East Anglia Offshore Wind (EAOW), which is backed by Swedish utility Vattenfall and Iberdrola-owned ScottishPower, submitted the plans today, paving the way for what would be the world’s biggest offshore wind farm.

The companies said the project would deliver enough power for up to 770,000 homes, while also creating around 2,700 jobs during the construction phase. It is expected to feature up to 325 wind turbines, three offshore collector stations, and two offshore converter stations.

If granted approval, construction work on the project could start in 2016 with the first wind being fed to the grid by 2018. As such the project will benefit from the government’s new clean energy support regime, which will come into effect from 2017 as part of the Energy Bill that is currently before Parliament.

EAOW said the project had the potential to boost the East Anglian economy by £500m during the three years of construction and 20-plus years of operation.

“This is the largest renewable energy project that either Vattenfall or ScottishPower Renewables are developing anywhere in the world,” said Andy Paine, EAOW Programme Director, in a statement.

“We are delighted to have achieved this major milestone today, following three years of detailed planning and community consultation. East Anglia ONE is a major project that could make a significant contribution to the UK’s carbon reduction targets, and is larger than any offshore wind farm currently in operation.”

He added that preliminary work on the project would now continue as the application is considered by the National Infrastructure Directorate.

The news was welcomed by the local MP for Waveney, Peter Aldous MP, who hailed it as “a welcome and significant step forward in the development of East Anglia’s growing green economy”.

“If approved by the Planning Inspectorate, this first phase of the East Anglia offshore wind farm will bring lasting skilled jobs, investment and a real economic boost to our area,” he added.