In landmark renewable energy news for Alaska, the 17.6-MW Fire Island Wind Project is now on line and generating power, concluding another rather remarkable story in American wind power development.

The facility, jointly developed by Summit Power and owner Cook Inlet Region, Inc. (CIRI), is the largest wind project currently on line in the state. The wind farm is located on Fire Island in Cook Inlet, three miles west of Anchorage. Rural cooperative Chugach Electric Association (CEA), the largest electric utility in Alaska, will buy the output from the project.

In spite of its now pumping out electrons just like any other operating wind farm today, Fire Island has not been your typical modern U.S. wind project characterized by incremental progress and the efficiencies that come with a maturing industry. 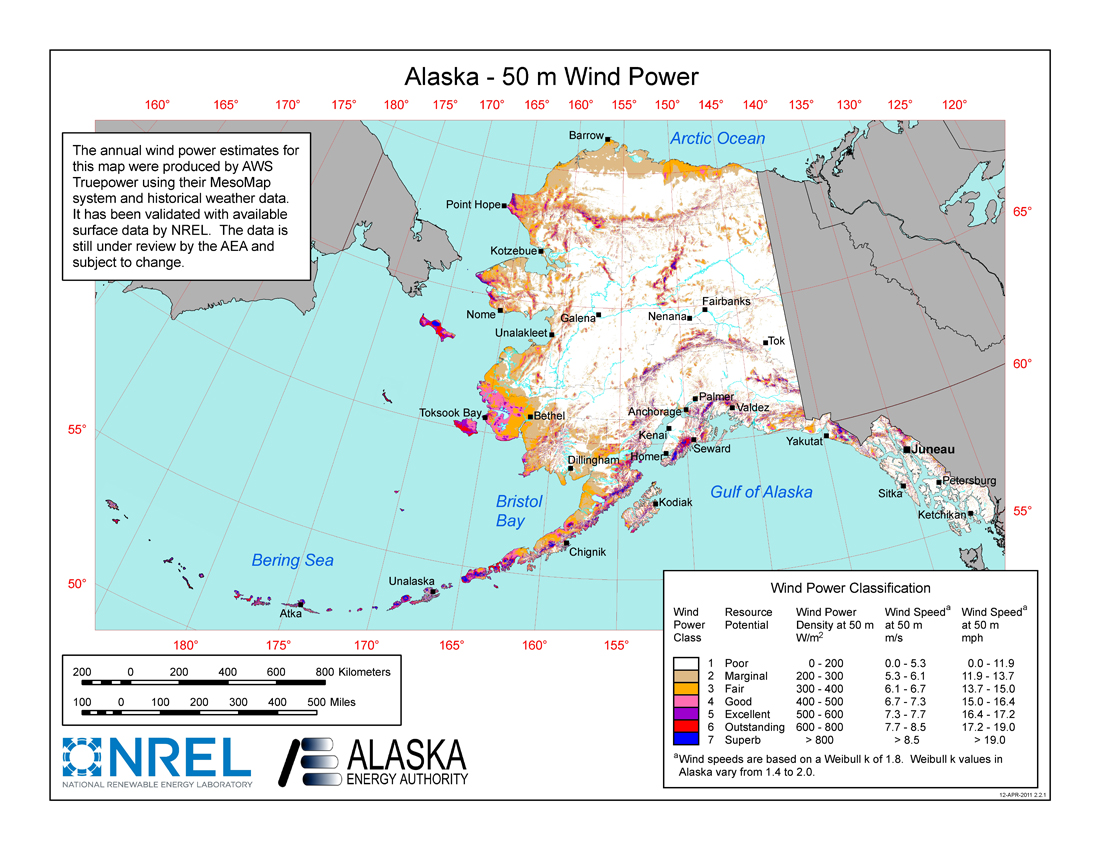 Development has been years in the making, and many unique twists and turns have come along the way.  It has been several years, in fact, even since CIRI brought Summit on board, at a point when the decades-old dream of wind energy reducing Anchorage’s dependence on natural gas-fired power was growing dim.

Originally the brainchild of Steve Gilbert, who was then with Chugach Electric, the project was first discussed back in the late 1990s (with several sites being considered), and met towers were place on the Fire Island site in the early 2000s. With wind-resource data available, in 2005 CIRI, the landowner, expressed an interest in developing the site.

But as project development continued, several issues arose that needed to be worked through, including the close proximity of federal radar facilities. In addition, the project met several barriers along the way, among them the extremely low cost of natural gas in the area versus the high cost of doing a project in the non-contiguous U.S.  Local utilities, meanwhile, were unfamiliar with the model of buying power from independent power producers (IPP). Today, the Fire Island wind farm is Alaska’s first major power project owned by an IPP.

At one point in the project’s history, the facility and wind power development as a whole appeared to be dead in Alaska, and so Gilbert left the state for (literally) greener pastures in Iowa, which today is one of the industry’s leading states.

The project, of course, did get resuscitated eventually, but breaking ground certainly did not mark the end of the challenges. Beyond the need to overcome the high cost that comes with any form of construction in Alaska, what it took to build the facility amounts to a fascinating and unique story in logistics. Not only does Fire Island have no bridge providing a link to the mainland, it has no port. Complicating matters still more: the island experiences 32-foot tides each and every day. As a result, bringing in equipment involved beach landings that had to be executed at specific times—and before the tide came in.

“Congratulations to CIRI, Chugach and their project partners in bringing this two-decade in-the-making project to fruition,” said Larry Flowers, AWEA deputy director for distributed and community wind. “Through vision, determination and hard work, CIRI and its project partners have addressed the many institutional, financial, technical and logistical challenges of being the first utility-scale wind project on Alaska’s Railbelt. While Alaska Village Electric Cooperative, TDX Power, Kodiak Electric and Kotzebue Electric have pioneered village wind-diesel system implementation, this grid-tied wind project will lead the way to many more wind megawatts on the five-utility Railbelt grid—an important step forward for Alaska renewables.”

To punctuate the story of perseverance, Gilbert, the project’s original champion and visionary, recently returned to live in Alaska—just in time to see the wind farm become reality. He’s taken a position with Alaska Village Electric Co-op, which (as Flowers referenced above) has done numerous smaller, wind-diesel projects in remote Alaska villages.