Car makers give cars to the Pope all the time because it’s good publicity.

French automaker Renault has given Pope Benedict XVI an electric car to whizz around in within the grounds of the Vatican and his summer home of Castel Gandolfo, the Holy See said Thursday.

Now Renault decided to step up the game by giving Pope Benedict XVI a couple of tailor-made electric vehicles.

The main electric car in which the Pope will be riding around is based on Kangoo Maxi Z.E. and was developed in association with the French coachbuilder Gruau.

A second electric vehicle was donated to the Corps of Gendarmerie of Vatican City. Pope is going to use the electric Kangoo to travel to his summer residence.

Each is 4.6 metres long and 1.8 metres wide, and has a 44kW electric motor and a lithium-ion battery that gives it a range – driven at suitably stately Papal speed – of about 170km.

And now the good people at Renault have clearly bagged themselves a prime parking spot in heaven by giving His Holiness an electric car.

The white, modified Kangoo Maxi Z.E. van boasts not only the Pope’s official livery, but also an impressive range of 170km (106 miles) on a single charge. And Renault hasn’t forgotten the Corps of Gendarmerie of Vatican City, otherwise known as La Fuzz, who can follow the Pope around in their very own blue version with snazzy white and yellow stripes.

What do exercise, religion, and laundry have in common? That’s right – they’re all things the Sceptic Tank just doesn’t “do”. The clue’s in the name really.

There’s a lot of unanswered questions, you see. Such as, why would a just and loving God inflict James Delingpole’s prose on the world, much less the electorate? And where did our favourite penguin socks go? 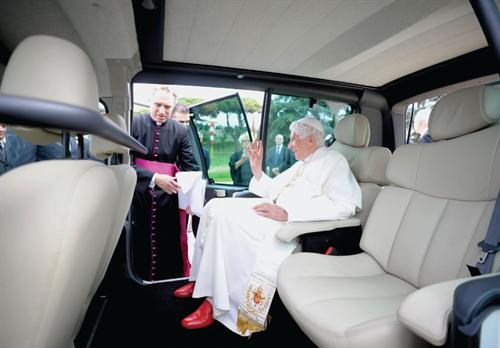 But recent developments seem to suggest that if there is a God, he or she may well be an environmentalist – just look at Pope Benedict XVI, the man considered God’s representative on Earth by almost a fifth of the world.

The Pope has written of the need to protect God’s creation in his encyclicals, as well as raising the issue on his foreign trips and in annual peace messages, while on his watch the Vatican has installed solar photovoltaic cells and offset its carbon dioxide emissions through a reforestation scheme.

Sadly, the new car is not an official Pope-mobile and will only be used for pootling around Castel Gandolfo, the papal summer residence.

But still, this is the third electric addition to the Vatican fleet after Italian automaker NWG donated an electric car to the press office earlier this year, a move that allows the church to set a fine example to the millions who look to the Pope for direction. And if the last two years as a green guru have taught the Tank anything, it’s that environmental progress is nothing if not a numbers game. 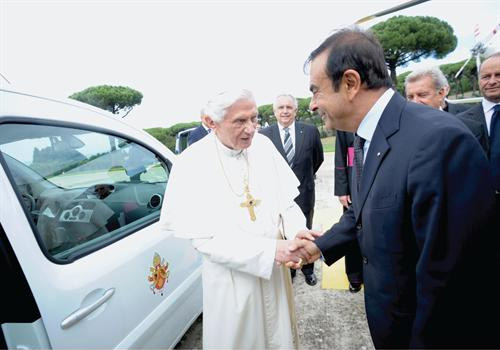