India is aiming for 20,000 megawatts of solar power by 2022 and most of the country’s existing capacity of 1,040 megawatts was built in the past year.

Of the 3,000 megawatts of solar energy plants proposed to be built starting in 2013, contracts for “1,000 megawatts or a little less” may be tendered in the first batch, Tarun Kapoor, joint secretary at the Ministry of New and Renewable Energy, said Tuesday in New Delhi.

India may auction a third of the solar projects planned by 2017 in the current financial year to double the nation’s sun-powered capacity as it seeks additional clean-energy investments to combat power shortages.

The plan provides some guidance to solar utilities and manufacturers, which have said India must demonstrate a reliable pipeline of projects to draw the investment needed to meet its targets.

“Predictable demand is probably the most important factor for us in the creation of additional manufacturing capacity,” Sujoy Ghosh, country head of First Solar, the world’s biggest thin-film panel maker, said in an interview this month.

Of the existing solar capacity in India, 620 megawatts of projects were auctioned until December while the rest was built in the western state of Gujarat under a separate program.

In the first phase of its solar program, India awarded contracts with incentives including special tariffs and a power- bundling arrangement designed to assure projects of buyers for their electricity. For the next phase, the government may consider some form of subsidy, Kapoor said.

India has used auctions to avoid the spiraling renewable- energy subsidies that burdened European governments. Project developers are awarded capacity based on the discount at which they’re willing to sell power. Under that system, the price of solar power in India fell 38 percent between 2010 and 2011.

Of those projects, 340 megawatts met a deadline to arrange financing from lenders including the U.S. Export-Import Bank, Axis Bank and ICICI Bank, Kapoor said. A 10-megawatt project was canceled for irregularities with its documents, he said, declining to elaborate.

Those projects are due to be completed by early 2013. Kapoor said 260 megawatts, or 76 percent of them, plan to use thin-film panels and the remainder will install silicon-based crystalline panels.

India, which suffered the world’s biggest blackout last month, depends on coal to generate more than half of its electricity. 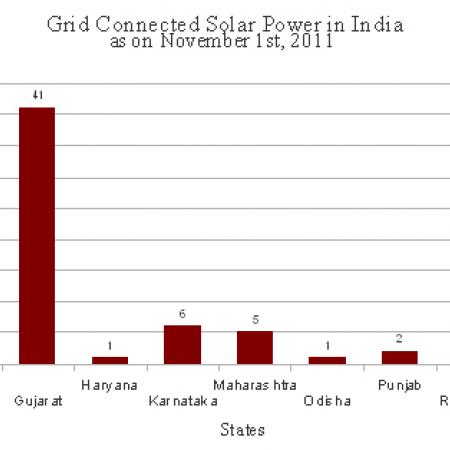