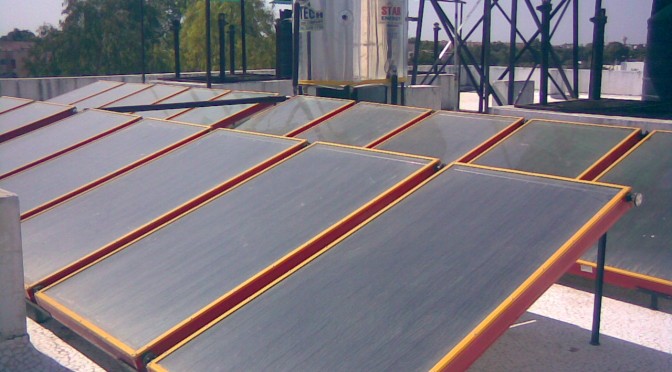 As per 2011 census, 36% of our population is still not able to access electricity at their homes in rural areas. In urban areas also, the demand is much more than the supply. Oil is being imported to the extent of 80%.

The project is being implemented by the Ministry and was started in September, 2008. It will be completed by 31st December, 2012. Under the Project, many activities have been undertaken apart from delivering various knowledge documents/products, which were highlighted in the half-day workshop. A number of stakeholders have contributed to the project outcomes and to recognize their contributions, Awards and Certificates of Appreciation were given away by Dr. Farooq Abdullah, Minister for New and Renewable Energy. A total of 13 awards were distributed for excellent contributions by State Nodal Agencies, Municipal Corporations, and Channel Partners of the Ministry.

Speaking on the occasion, Dr. Farooq Abdullah emphasized on the need to explore and tap new and renewable sources of energy to meet energy needs and protect the environment from greenhouse gases. There is abundance of solar energy available in most parts of the country but to tap it for electricity generation or for other useful purposes is the key . To make it affordable and cost effective, sincere efforts have to be made and suitable policies have to be formulated, the minister said. A total of around 1000 MW capacity solar power plants have been installed in the country in last two years and if this trend continues, the country will achieve the target of 20000 MW by 2022, he added.

Also speaking on the occasion , Ms. Lise Grande, Project Manager ,UNDP lauded the role of the Indian Government in promoting sustainable energy and reducing environmental pollution. She added that the present solar energy project will be a model all over the world.

The full text of the speech of Dr. Farooq Abdullah is given below:-

“ First of all, I would like to congratulate all those who have got the Awards today on their excellent performance during 2012 on various activities related to solar water heating programme in their areas. I would also like to congratulate my officers in the Ministry who have been handling the UNDP-GEF project on solar water heating and have been able to develop a good number of knowledge documents and products in the project. These documents, I feel could be useful to various stakeholders involved in accelerating the growth of the programme. I noted that a new website has been developed specifically devoted on solar water heaters where all such documents being uploaded could be easily accessed.

Friends, we all know we are short of power. As per 2011 census, 36% of our population is still not able to access electricity at their homes in rural areas. In urban areas also, the demand is much more than the supply. Oil is being imported to the extent of 80%. These need to be conserved for the benefit of those who are not able to access it. We also need to explore and tap new and renewable sources of energy so as to meet our energy needs and protect the environment from greenhouse gases accumulation.

I am glad to say that my Ministry has done a tremendous work in this area during past many years especially during the 11th Plan. Over 13% of the power produced in the country is through renewable energy. Against a cumulative figure of 26,000 MW, around 15,000 MW has been done in 11th Plan alone and we expect to add another 30,000 MW during 12th Plan which is more than what has been done so far in last 30 years of Ministry’s tenure. I am sure if we are able to grow like this, time will come when power from renewable will override the power generation from conventional fuels.

We have abundant of solar energy. This is available in most parts of the country almost throughout the year at free of cost. We need to tap it and make India world leader in the field of solar energy. Jawaharlal Nehru National Solar Mission launched in 2010 is a step in this direction. We were always being told that though India is full of solar energy, but tapping it for electricity generation or for other useful purposes is very expensive. And until and unless required efforts are made and suitable policies are announced, it cannot be made cost effective.

Well, National Solar Mission announced by the Government has shown the cost reduction drastically in last two years of its operation only. The price of solar electricity which was around Rs.18 per unit has come down to Rs.8 which is new to the conventional electricity tariff. But this is the case of solar photovoltaics. We also need to see that cost of solar thermal comes down. Besides this, we need to ensure that quality and durability of the product is maintained which is a challenge in the Mission.

A total of around 1000 MW capacity solar power plants have been installed in the country in last two years, which I see is a good progress made by the promoters and developers. I am sure if this trend continues, we will be able to reach our target of 20,000 MW by 2022 easily. But, to achieve this, concentrated solar power also has to play a big role. I am told, many plants of 50-100 MW capacity are already at the stage of implementation in Rajasthan and will be completed before the end of Phase-I of the Mission i.e. March, 2013.

I personally feel since such plants use the concentrating solar technologies which may be good for generation of electricity in areas where solar radiation is intense and barren land is available in plenty, but their use will be much more cost effective, if these are installed at places where huge amount of electricity or fuel oil is being consumed for heating and cooling purpose.

I am told about 15 million tones of fuel oil is being consumed in industries alone for process heat applications requiring temperature below 250 C. Over 5,000 trillion units of electricity is also being consumed in various establishments for hot water and air heating applications. Another 35,000 MW power is being utilized for cooling applications out of which 50% is being generated through DG sets requiring fuel oil due to power shortages. Huge amount of LPG is also being use for cooking in community kitchens. I think these are the areas which we need to target with concentrating solar technologies.

I had visited Shirdi about two years back and saw that food for about 20,000 people was being cooked every day using this technology. Such systems have been installed at many other religious places also, which include Tirumala Deva Sansthan, Tirupati, Brahmakumaris Ashram, Mount Abu, and Art of Living, Bangalore apart from various Universities and Colleges’ Hostels. I am told that these technologies have also been tried for cooling and process heat applications. The examples are, however, very few. We need to extend them at more and more places. The potential is vast and we need to tap it.

Solar water heater which is the subject of this workshop today has already been an established technology and our industry is doing a good job in this area. We are happy that we got a UNDP-GEF project on this technology in 2008 which has helped in accelerating the growth of this sector to a large extent in the country. The installations made so far are, however, still low as against the techno economic potential of 40 million sq. m. of collector area which is can be easily achieved in few years if all efforts are made by all of us in right direction.

Hot water we all know is required in homes, hotels, hospitals, student hostels, guest houses, industrial establishments and many other places. Electricity and fuel oil being used for heating water needs to be minimized through use of solar water heaters. I am told China is far ahead in this area. Almost 60% of the worldwide installations are in China alone. If you happen to visit this country you will find all around you in various establishments solar water heaters installed where hot water requirement is there. We need to have a similar situation here.

Let each and every house in the country and establishment requiring hot water have a solar water heating system installed at its terrace. Use of electric geysers is stopped or minimized for heating water. I know it is an ambitions reason but is not impossible. There are countries like Israel, Jordan, Cyprus and Turkey who made the use of such system mandatory and could do this.

I am told in our country also Ministry of Urban Development have issued GOs to States and many Municipal Corporations and Municipalities are following them even but the enforcement is poor. A few Corporations who got the awards today are doing a good job in this direction and this needs to be followed by others.

Industry also needs to be geared up to take up such ambitions goal. They need to ensure that they have a good marketing and after sales repair and servicing network and the systems are installed of best quality. Quality of the product is very important and this needs to be done by giving proper training to their technicians by the industry. We need to develop confidence of the users on the product or else we all will be criticized for doing a poor service to the Nation.

My Ministry is putting all efforts to see this vision happening in the coming years and will also provide all support to various stakeholder working in this direction. We will look forward to your active and sincere efforts too.

With these few words, I once again congratulate all those who got the awards today and wish the other contemporaries to made more efforts so that they are also able to get the same next year. I also thank the UNDP & GEF Agencies to provide support to various projects in the Ministry which is helping in accelerating the growth of the programme.