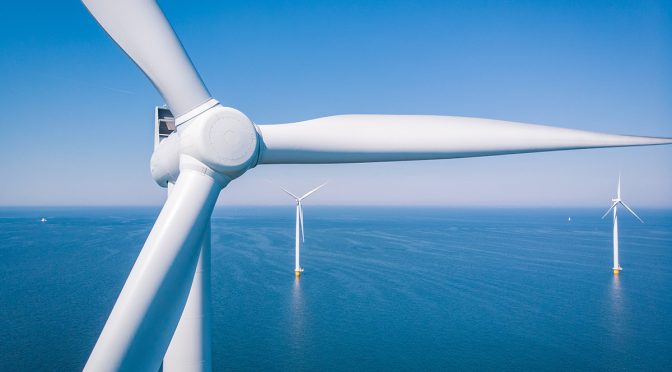 After years of delays, the fledgling offshore wind industry finally made headway in 2022. Here’s a rundown of the sector’s busy year and a preview of what lies ahead.

The United States has long hovered on the cusp of an offshore wind energy boom, even as the industry has soared worldwide. After many fits and starts, only seven turbines are spinning off the U.S. coast, representing 0.1 percent of the total global capacity of offshore wind farms.

Now that’s all starting to change.

With companies hitting major milestones this year — and with more developments on deck in 2023 — momentum is building in the fledgling U.S. offshore wind industry.

Commercial-scale wind farms are advancing in the Atlantic Ocean, the first of which are slated to start operating next year. Large tracts in the Pacific Ocean are now open for offshore wind development, following a first-ever federal auction held earlier this month. Community groups in New York City and beyond are making progress to ensure that residents most affected by fossil-fuel pollution are the first to fill the coming clean-energy jobs.

McClellan, who has worked on offshore wind initiatives since 2010, said the organization launched late last month to help guide the industry as it moves into this new phase of large-scale development. The goal is to build many gigawatts’ worth of offshore wind capacity in ways that not only tackle climate change but also address the country’s economic and equity challenges, all while protecting marine and coastal resources.

“Rolling into 2023, this is a moment to start to envision what offshore wind’s future is going to look like in this country,” she told Canary Media.

America is poised to meet the Biden administration’s goal of installing 30 gigawatts of offshore wind farms by 2030, or enough to power more than 10 million homes for a year. Eleven states already have more than that amount in their combined project pipeline. For densely populated coastal regions, the ocean represents one of the few available areas for installing large amounts of renewable energy capacity.

At present, however, only 42 megawatts (0.042 gigawatts) of offshore wind power is actually installed off the coasts of Rhode Island and Virginia.

In order to make all of the planned projects a reality, many things will need to go right, and swiftly, at every step of the way — from securing permits, procuring giant turbines and building specialized ships to laying large subsea cables, developing floating turbine technologies and securing support from communities, conservationists and commercial fishing groups.

If the industry can pull it off, the country could see a huge infusion of clean power, much of which will be delivered directly to energy-hungry coastal cities. The National Renewable Energy Laboratory estimates that the United States has enough offshore wind resources to potentially meet the nation’s entire electricity needs two times over.

The developers of South Fork Wind — Danish energy giant Ørsted and Boston-based energy provider Eversource — have been working since February on the project’s onshore components, which include a new electrical substation on the east end of Long Island. Last month, a self-elevating vessel called a ?“liftboat” sailed up from the Gulf of Mexico to an area off East Hampton’s shore as part of preparations for offshore work.

The liftboat will serve as a floating workspace throughout the winter as technicians build the ?“tie-in” that connects onshore electrical infrastructure to the submarine cables carrying power from the wind farm, said Jennifer Garvey, the New York market affairs manager for Ørsted.

“Its arrival is just another indicator of how much progress we’re making,” she said of the vessel.

Next summer, developers will begin installing steel monopile foundations and a dozen 11-megawatt offshore turbines. The wind farm, which will stand about 35 miles east of Long Island’s easternmost tip, is expected to start producing power at the end of next year, Ørsted said.

If the project stays on schedule, South Fork Wind will become the nation’s first commercial-scale offshore wind farm to deliver power to the grid — unless the Massachusetts wind farm can beat it to the punch.

Vineyard Wind, which is jointly owned by Denmark’s Copenhagen Infrastructure Partners and Avangrid Renewables, already bills itself as the first project of its kind. That’s because in May 2021, the commercial-scale project was first to receive its final permits from the Bureau of Ocean Energy Management, which regulates energy development in federal waters. (BOEM approved South Fork Wind’s plans in January 2022.)

With 62 turbines, Vineyard Wind will sit some 15 miles off the coast of Martha’s Vineyard. Last month, developers began installing a large submarine cable that will deliver power from the 13-megawatt turbines to a substation further inland on Cape Cod.

“For a project that has achieved many firsts, the beginning of offshore cable installation is perhaps the most significant we have achieved so far,” Klaus S. Moeller, CEO of Vineyard Wind, said in a November statement.

In February, BOEM sold a record $4.37 billion in leases for six offshore wind areas near New York and New Jersey. The lease areas cover 488,000 acres and, once fully developed, are expected to support roughly 5.6 gigawatts of offshore wind development.

And in early December, BOEM held the first-ever auction for the Pacific region. The bureau awarded offshore wind rights for five lease areas near Northern and Central California.

Winning bidders spent a combined $757 million to lease the tracts, which together span 373,000 acres and could provide 4.5 gigawatts of renewable generation capacity — an amount that’s crucial for California to meet its goal of 100 percent zero-carbon electricity by 2045.

Unlike projects on the East Coast, which use fixed-bottom foundations to hoist turbines from relatively shallow seabeds, most projects on the West Coast will need to use floating turbines. That’s because the outer continental shelf that runs along the Pacific seaboard drops down swiftly to 3,280 feet or more, requiring developers to use floating platforms and other buoyant technologies to generate wind power in deeper waters.

Only about 121 megawatts (0.12 gigawatts) of offshore floating wind capacity was operating globally in 2021, and nearly all of it was in Europe. So it’s no surprise that major European developers dominated the California auction. One of the winning bidders, Norwegian energy giant Equinor, already has floating offshore wind projects near Scotland and Norway — the latter of which began producing power from its first turbine last month.

Although outsiders are providing the know-how, groups in California are working to ensure that local communities are trained and ready to participate in the economic opportunities that projects are expected to bring. Environmental groups say they’re partnering with state policymakers, port operators and labor union leaders to develop job-training programs as the state builds the nation’s first floating offshore wind farms.

“There’s a scale of complexity to these projects that requires a lot of skill,” said Eddie Ahn, executive director of Brightline Defense, a nonprofit based in San Francisco. ?“For us, it’s really about equitable economic development as this technology is being deployed.”

Ahn, who is also a founding board member of the advocacy group Turn Forward, spoke to Canary by phone this month from Humboldt County. He was meeting with state government agencies, local community groups and the Port of Humboldt’s leaders to study possible workforce opportunities in the area. California recently approved a $10.5 million grant to renovate the port to support offshore wind activities, which could include building and staging floating wind foundations and handling large cargo vessels.

“Making sure that these jobs go to local underemployed and unemployed communities is important to us,” he said.

Maria Gallucci is a clean energy reporter at Canary Media, where she covers hard-to-decarbonize sectors and efforts to make the energy transition more affordable and equitable.