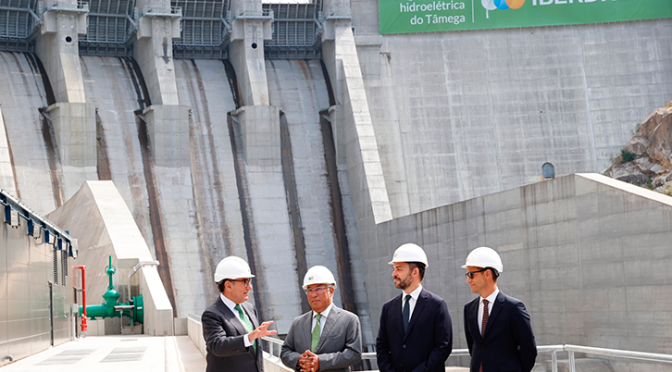 Portugal’s Prime Minister António Costa has presented the new procedures to speed up renewable projects in the country from the Alcochete solar plant, which has just completed its construction.

Iberdrola has reaffirmed its commitment to clean energy in Portugal and announced that it will accelerate its investments to expand the country’s renewable capacity during a meeting today between the Prime Minister of Portugal, António Costa, and the Chairman of the Iberdrola Group, Ignacio Galán.

Ignacio Galán ratified the company’s plans to support the energy transition in this country, where Iberdrola already has projects under construction that will enable it to triple its photovoltaic capacity by 2023. Thus, by the end of next year, the group’s investments in Portugal will exceed 2,000 million euros. In addition, the company plans to allocate 3 billion euros in the coming years to solar, wind and storage projects, as well as new solutions such as green hydrogen.

The meeting took place at the Alcochete I and II solar plants (46 MW), in the district of Setúbal (Lisbon region), whose construction, which has just been completed, took just eight months. The complex, located in the town of the same name, involved an investment of around 40 million euros and generated up to 180 jobs during its construction, most of which were filled by local workers.

These parks have bifacial solar modules, which increase energy production by up to 30% compared to traditional panels because both sides of the panel are able to absorb the sun’s energy. In addition, bifacial cells reduce the average cost of electricity by 16%.

The plants also have a tracking system that allows the modules to move according to the path of the sun, thus maximising energy capture and extending the useful life of the plant by reducing degradation. When they come into operation, Alcochete I and II will supply enough green energy to meet the needs of 26,400 households for a year, which is more than the total population of the municipality of Alcochete.

During the event, António Costa announced the new SIMPLEX permitting procedures to encourage the rapid deployment of clean energy. The incorporation of these procedures into the SIMPLEX programme to streamline and modernise the administration aims to accelerate the response to the double challenge posed by the climate and energy crisis in Europe.

In this sense, Ignacio Galán insisted on accelerating the implementation of the European Green Pact and the EU’s REPower package. “Thanks to the impetus of the European Commission, valuable decisions have been taken in recent months. But it has also become clear that all Member States must work in a coordinated way to complete the single energy market in Europe”, he said.

Iberdrola’s chairman highlighted the stability of the regulatory outlook in Portugal and the dynamic approach to permitting processes as the key factors behind Iberdrola’s commitment to grow its operations in the country.

“The measures announced in recent months by Prime Minister Costa’s government and the new initiatives underway show Portugal’s clear leadership. This effort must also be shared by companies. And therefore, in response to its clear and stable regulation, Iberdrola wants to take a further step in its commitment to Portugal and its citizens”, added the company’s chief executive.

This is the second meeting between António Costa and Ignacio Galán in the last six months, following the inauguration of a mega pumped hydroelectric plant in Alto Tâmega, northern Portugal. The group is planning to build a wind power complex linked to this facility, which will turn the complex into a hybrid generation plant, which, with its 400 MW of installed capacity, will be one of the largest wind power projects in Portugal.

The Tâmega gigabattery, the largest clean energy initiative in the country’s history with an investment of more than 1.5 billion euros, has three dams and three power plants (Gouvães, Daivões and Alto Tâmega) and a storage capacity of 40 million kWh, equivalent to the average daily energy consumption of 11 million people.

In addition to the Alcochete solar complex, Iberdrola has completed two other photovoltaic facilities in the Setúbal district: Conde, with 13.5 MW, and Algeruz II, with 27 MW.  Construction of the remaining plants awarded to the company in the 2019 auction will begin in early 2023. Specifically, the 37 MW Montechoro I and II projects in Paderne (Albufeira) and the 64 MW Carregado project in Alenquer (Lisbon). On the other hand, the 84MW Estoi solar plant (Algarve), which also includes battery storage and which corresponds to the 2020 auction, will come on stream in 2024.

Iberdrola already operates 92 MW of wind power in Portugal, spread over three wind farms: Catefica, in the municipality of Torres Vedras, with 18 MW; Alto do Monção, in Mortágua and Tondela, with 32 MW; and Serra do Alvão, in Ribeira de Pena, with 42 MW. Together, these plants produce 200 GWh per year, equivalent to the electricity used by 35,000 households.

The Iberian Peninsula has great potential for the future supply of clean energy in the European Union. Plans to reduce dependence on fossil fuels represent a great opportunity for a territory with significant sun and wind resources.

Iberdrola, which has consolidated its position as the leading promoter of photovoltaic solar energy, is currently developing projects totalling more than 3,000 MW of new photovoltaic capacity, almost equally divided between Spain and Portugal. In this way, the company will almost double its installed capacity of this technology, which currently exceeds 2,330 MW on the Iberian Peninsula, almost all of which is located in Spain.

The Iberdrola group began its commitment to renewable energies more than two decades ago as a fundamental pillar on which to build its clean, reliable and intelligent business model. Thanks to this vision, the company is spearheading the energy transition towards a low-emission economy and is today a world leader in renewable energies, with more than 39,000 MW of renewable capacity installed worldwide.

Between 2023 and 2025, the company will invest around 17 billion euros in renewable energies in secured, high-quality projects. Of this, 24% will be allocated to photovoltaic initiatives.