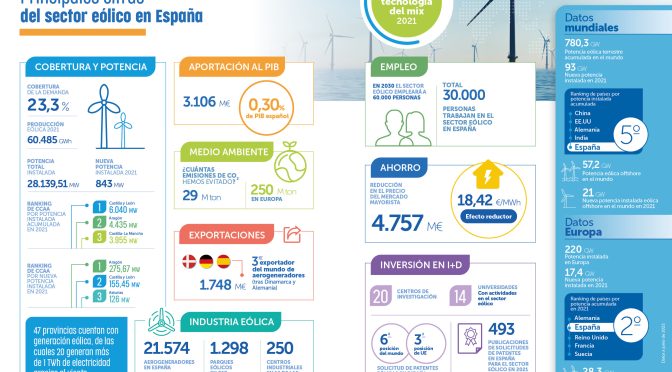 An analysis of the current situation of wind power in Spain and in the world, and its key role in the new energy scenario
The Wind Energy Business Association (AEE) presents a new edition of the reference publication for the Spanish wind energy sector: the Wind Energy Yearbook 2022, the voice of the sector.

This publication, prepared by AEE, contains the most representative data on the contribution of wind power in our country. The Yearbook analyzes the current moment of wind energy in Spain and in the world, with assessments of the contribution of this technology in the new global energy scenario and with a view to European and national objectives, advancing towards a model that allows a wind industry competitive, economically sustainable and with the capacity to continue developing R&D and added value.

SPAIN IS A LEADER IN WIND POWER GENERATION. Main figures: Wind power is the technology that contributes the most to our energy system, exceeding 23% of demand in 2021. Spanish wind power is the fifth power worldwide in the ranking of countries with the largest installed wind power and the second at European level. In 2021, 842.61 MW of wind power were installed, a relevant figure, but well below the 2.2 GW per year that would be necessary to install until 2030 to achieve the objectives set in the National Plan National Integrated Energy and Climate Plan (PNIEC) . As of December 31, 2021, the total installed capacity in Spain was 28,139 MW. The more than 21,500 wind turbines installed in Spain generated 60,485 GWh of wind power, 10.2% more than in 2020. 47 provinces have wind power generation, of which 20 generate more than 1 TWh of electricity thanks to the wind. Aragón has been in 2021 the autonomous community that has stood out for its increase in wind power, followed by Castilla-León and Asturias. Wind energy contributes more than 3,100 million euros to the Spanish economy, 0.30% of GDP, with exports valued at more than 1,740 million euros, with Spain being the third largest exporter of wind turbines in the world, after Denmark and Germany. The wind sector in Spain currently employs 30,000 people, and in 2030 this industry will employ 60,000. Spain was the fourth country that attracted the most investments in clean technologies in 2021 with €11,100 million. From the point of view of the environment, thanks to wind power, 29 million tons of CO2 are avoided each year in Spain and 250 million tons in Europe. Faced with the high prices of fossil fuels, wind generation helps reduce the daily market price of electricity. In the first 7 months of 2022, wind energy generated savings for consumers of €13.35/MWh as a reducing effect with respect to the market price, which translates into savings of €2,057 million for consumers.

POWER AND WIND GENERATION IN SPAIN
In 2021, 842.61 MW of wind power were installed in Spain and 18.30 MW were dismantled, placing the total as of December 31 at 28,139.51 MW (according to data collected by AEE, using the criteria of the Installation Act in service).

In Spain there are 1,298 wind farms present in 857 municipalities, with 21,574 wind turbines installed. Likewise, there are more than 250 manufacturing centers in sixteen of the seventeen autonomous communities. In 2021, 60,485 GWh of wind power were generated, 10.2% more than in 2020. In addition, wind power operated an average of 2,140 equivalent hours per year and covered 23.3% of total generation nationwide in 2021, placing as the leading technology in the Spanish energy mix, above nuclear (20.8%) which until now had held that first position.

It is followed by Lugo with 4,674 GWh and Burgos with 4,511 GWh. There are 47 Spanish provinces with wind generation, of which 20 produce more than 1 TWh (with this amount the consumption of 285,000 households is covered).

THE REDUCING EFFECT OF WIND POWER ON THE BILL
Wind generation implies a reduction in the price of the daily electricity market, which becomes more important in the situation of high prices in which we find ourselves.

In 2021, the Reducing Effect of wind power was €18.42/MWh, which represented cumulative gross savings of €4,757 million for consumers.

The Reducing Effect of wind power last year has been considerably higher than in 2019 and 2020, mainly due to the large increase in the cost of natural gas that has driven the price of the Spanish electricity market to an annual record.

For domestic consumers (after discounting the incentives for wind energy) with an average annual consumption of 3,650 kWh, this has meant a net saving of €41.41. For an average commercial consumer with the AT1 Rate and a consumption of 597 MWh per year, throughout 2021 the savings have been €9,530 (minus the wind energy incentives included in their electricity bill); and for an intensive industrial installation in electricity consumption with Tariff T4 (and 23,745 MWh of consumption) the net saving has been €424,302.

GREAT WORLD TRENDS
Installed wind power in the world grew in 2021 to 837 GW, according to data from the Global Wind Energy Council (GWEC), helping the world avoid more than 1.2 billion tons of CO2 per year. 2021 has been, so far, the second best year in history for the global wind industry with 93.6 GW of new installed capacity, behind the record growth of 2020, which was 1.8% higher. China, the United States, Germany, India and Spain are the world’s leading producers.

On the Asian continent, China, in first position in the world ranking, has added 46.9 GW in 2021, and has a wind capacity of 329 GW, 40% of the world’s wind power. Vietnam has stood out in 2021 for the 3.6 GW installed, multiplying by eight its previous installed wind power. On the other hand, India installed 1,508 MW and has 40 GW of wind power.

The United States has experienced another consecutive year of strong growth in wind energy with the installation of 14 GW, which means that it has already passed the mark of 130 GW of wind installed in the country (132 GW). In South America, Brazil accumulated 3,963 MW, Chile 988 MW and Argentina 668 MW, while Mexico installed 1,188 MW. According to IRENA data, 21.62 GW of new wind power would have been installed throughout the Americas in 2021, a figure similar to that of 2020.

In Europe, in 2021, according to WindEurope, the total installed capacity was 17.4 GW. The new power has been led by the United Kingdom, Sweden, Germany and Turkey. For its part, Spain continues to be the second European country and the fifth in the world with the most accumulated installed power with 28.2 GW. Of those 17.4 GW of new capacity in 2021, 3.3 GW belong to offshore wind installations in European waters. With this new capacity, the total installed capacity of offshore wind power on the continent amounts to 28.3 GW.

In total, the EU-27 already has 189 GW of wind power (onshore and offshore). With the 437 TWh generated with all that power, the demand of 73 million households in the EU would have been covered. In addition, the emission of 250 million tons of CO2 into the atmosphere has been avoided, as well as the importation of fossil fuels worth more than 30,000 million euros.

PROSPECTS FOR OFFSHORE WIND POWER
The offshore wind market has grown an average of 22% per year in the last decade, reaching 57.2 GW installed worldwide at the end of 2021, 28 GW of them in Europe. The year 2021 was a historical record, with a total of 21.1 GW of new installations connected to the network worldwide.

During 2021, China (with 16.9 new GW) was the country that installed the most offshore wind power. Europe, which until 2021 was the main market in terms of installation volumes, represented the second region in terms of new installations, with 3.3 GW. North America only has 42 MW, although significant growth is expected from 2023. China is currently the first country in the world by installed capacity, with 27,680 MW, followed by the United Kingdom.

The development of floating offshore wind power off the Spanish coast is an opportunity both for the wind sector and for other sectors with which there are obvious synergies. For example, our ports and shipyards will undoubtedly increase their activity. Other industries will be able to diversify their products and services thanks to the wind farm.

Collaboration between the actors related to offshore wind development is essential to meet the challenges of offshore wind power in Spain, where the Roadmap for the Development of Offshore Wind Power and Energies from the Sea, approved in December 2021, contemplates some objectives installation of floating wind power from 1 to 3 GW by 2030. This challenge is achievable as long as the relevant regulation is streamlined, specific auctions are called and the Marine Space Management Plans (POEM) are approved. It is essential to work with rigor, dialogue, consensus, with balance and seeking understanding between all the parties involved.

The Ministry for the Ecological Transition and the Demographic Challenge has announced that the first offshore wind auction could be held during the first quarter of 2023. To reach this milestone, it is necessary that in the coming months decisive progress be made in some of the measures already identified in the Roadmap, such as the approval of the Maritime Space Management Plans in which the areas finally designated for offshore wind are identified.

The Spanish offshore wind sector has set up the Offshore Wind Forum, as an initiative to promote dialogue between the different sectors. More information at www.foroeolicomarino.org.