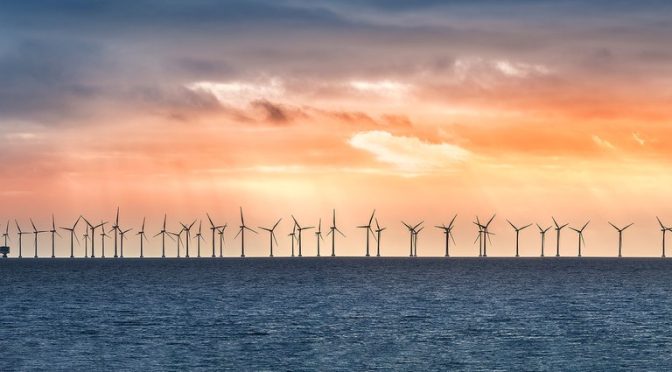 The President of the Republic, Jair Bolsonaro, issued a Decree that provides for the transfer of the use of physical spaces and the use of natural resources in internal waters of the Union’s domain, in the territorial sea, in the exclusive economic zone and on the continent. platform, for the generation of electricity from an offshore company.

The Decree aims to fill the gap identified by public institutions, businessmen, specialists and organizations of a regulatory framework for the exploitation of marine electrical potential in Brazil – especially related to issues on the implementation and the concession model – constituting an important advance in the development of the wind source in Brazil. The proposal was the subject of numerous meetings and discussions between the Ministry of Mines and Energy and other actors during 2021, including Ministries with issues involved, the Brazilian Institute of Environment and Renewable Natural Resources (IBAMA) and national and international organizations.

Having been highly demanded by the wind generation sector, the Decree provides clarity to the mechanisms for assigning the use of areas in inland waters, in the territorial sea, dividing the procedures between the Secretariat for Coordination and Governance of the Union’s Heritage (SPU ) of the Ministry of Economy and the Ministry of Mines and Energy, in compliance with Law No. 9,636, of May 15, 1998. As they are public goods of the Union with multiple stakeholders, the regulation complies with the provisions of the United Nations Nations Convention on the Law of the Sea, promulgated by Decree No. 1,530, of June 22, 1995, regarding the use of natural resources in the exclusive economic zone and on the continental shelf, for the generation of electricity in high sea.

Therefore, the published Decree regulates that the authorization of the right to use Union goods in physical spaces located in internal waters, in the territorial sea and the use of natural resources in the exclusive economic zone and on the continental shelf will be authorized. for the generation of electrical energy in the sea. by the MME, by virtue of the conclusion of a contract for onerous use of a public asset, in compliance with art. 18 of Law No. 9,636, of May 15, 1998, and Law No. 8,617, of January 4, 1993.

Such regulation is also desirable and compatible with the transformations that the Brazilian Electricity Sector has been experiencing in recent years, especially due to the evolution of the electric matrix, accompanying the modernization of electric power generation technologies from renewable sources and with great power capacity, characteristics that are important to meet the growth in demand in the coming years.

The Decree defines how the procedures must be carried out, where the assignment requests can be submitted and what steps the entrepreneur must follow to carry out the undertaking.

Once the transfer of use has been obtained, it will be the contractual obligation of the entrepreneur to carry out the necessary studies to identify the offshore energy potential, and must comply with the criteria and deadlines defined in a specific act of the Ministry of Mines and Energy.

Regarding the concession for the exploitation of the electricity generation service, it is not modified, and must be carried out after a study to identify the generation potential and prior authorization, granted by the National Electric Energy Agency (ANEEL), in the terms of Law No. 9,074, of July 7, 1995.

The Decree also provides, with the aim of debureaucratizing the process and contributing to the centralization of processes, the possibility for the MME to delegate to ANEEL the powers to sign the assignment of use contracts and carry out the necessary acts for their formalization.

Finally, it should be noted that this measure will represent an important step towards the simplification of procedures within the existing legal possibilities, helping to provide the necessary legal certainty to national and international investors interested in developing generation projects, including offshore wind farms.

Brazil, in particular, has favorable characteristics for the installation and operation of enterprises for the generation of electrical energy in the sea. As well as 7,367 km of coastline and 3.5 thousand km² of maritime space under its jurisdiction, the country has an extensive continental shelf that gives it shallow waters along its coastline, benefiting from the incidence of two trade winds, present in the northeastern region of the country, of constant intensity and direction, one of the best characteristics for the viability of offshore wind farms.

The 2050 National Energy Plan, prepared by the Energy Research Company (EPE) and approved by the Ministry of Mines and Energy (MME) by MME Portaria n° 451/GM/MME, provides for an installed capacity of wind power generation Offshore no Brazil around 16 GW without Horizon do Plano, case has a reduction of 20% without CAPEX dessa fonte. This outlook remains the same with indication of high growth in onshore wind capacity beyond 2050.

In 2020, the EPE included for the first time in the Ten-Year Energy Expansion Plan (PDE 2029), approved by the MME by meio da Portaria nº 38/GM/MME, the offshore wind source as a candidate for expansion, as of 2027.

O PDE points out, considering a reality in 2021, that offshore wind power is not yet competitive compared to other expansion options, but that this scenario may change depending on the evolution of the technological maturity of the source, as well as technical studies -economic, socio-environmental, and regulatory development, referring this last object of the Decree published today.

As two important recent highlights that contributed to the evolution of national knowledge on offshore wind generation, we cite the activities and studies carried out by EPE to identify the Brazilian offshore wind potential that resulted in the publication in April 2020 of “RoadMap Offshore Wind – Perspectives and pathways for offshore wind power”.

The objective of RoadMap is to identify possible barriers and challenges to be faced for the development of the offshore wind source in Brazil, in addition to better understanding the aspects related to this source.

It is expected that, from the publication of this Decree and the regulations that follow it, the path for the development of offshore companies can guide those interested in developing and undertaking in Brazil. At the same time, offshore generation is expected to gradually occupy a relevant place in the Brazilian electricity matrix and drive business generation in the next two years.