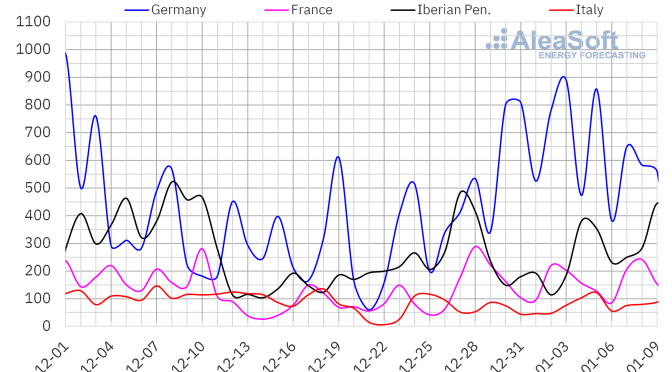 European electricity markets prices take a break in the third week of January.

In the third week of January, electricity markets prices fell in a generalised way. Even so, weekly averages exceeded €185/MWh in most cases and in the British market on January 17 the highest hourly price of the year, of £1161.06/MWh, was reached. Wind energy production increased in some markets and in the Iberian market on the 19th the highest solar energy production for a month of January was registered. Gas prices fell and Brent reached a maximum since 2014.

The third week of January ended with an increase in solar energy production of 15% in the Iberian market compared to the previous week. In addition, on January 19, the highest production with this technology for a January in the peninsula, of 72 GWh, was registered thanks to the increase in capacity that is materialising in recent years. On the contrary, a reduction of between 5% and 10% was registered in the rest of the markets analysed at AleaSoft Energy Forecasting.

For the week of January 24, AleaSoft Energy Forecasting’s forecasts indicate an increase in solar energy production in the German and Italian markets. However, a contraction in production is expected in the Spanish market.

The wind energy production increased by 77% in the German market and 46% in the French market during the week beginning January 17, compared to the week before. On the contrary, the production with this technology fell by 47% in the Italian market and 10% in the Iberian Peninsula.

The electricity demand increased in most European markets in the week of January 17 compared to the week of January 10. The increases were between 0.6% and 3.5%. The drops in average temperatures in some markets led to these increases. In particular, the falls of 2.2 °C in the Spanish market and 2.0 °C in the Portuguese market were the cause of the respective increases of 3.5% and 3.3%.

According to the AleaSoft Energy Forecasting’s demand forecasting, increases are expected during the week of January 24 in most cases, especially in the British and Portuguese markets.

Despite the price drops, in the third week of January, almost all analysed markets reached weekly average prices above €185/MWh. The exceptions were the Nord Pool market and the German market, with averages of €85.91/MWh and €169.11/MWh, respectively. On the other hand, the highest weekly average price, of €229.70/MWh, was that of the N2EX market of the United Kingdom. In the rest of the markets, prices were between €186.60/MWh of the market of the Netherlands and €226.63/MWh of the French market.

On the other hand, it should be noted that, despite the decrease in the weekly average, on January 17, at 18:00, a price of £1161.06/MWh was reached in the British market, the highest so far this year in this market.

The AleaSoft Energy Forecasting’s price forecasting indicates that in the week of January 24, prices might increase in a general way in the European electricity markets, favoured by the increase in demand in most markets. In addition, in the case of the Iberian Peninsula, the decrease in wind and solar renewable energy production might also exert its upward influence on MIBEL market prices.

Brent oil futures for the Front?Month in the ICE market began the third week of January with price increases. As a consequence, on Wednesday, January 19, a settlement price of $88.44/bbl was reached. This price was 4.5% higher than that of the previous Wednesday and the highest since October 2014. However, the last days of the week the prices fell slightly to $87.89/bbl of Friday, January 21.

Despite the expansion of the Omicron variant of the coronavirus, which is giving rise to record numbers of infections, the demand remains high. This favours the upward trend in prices. On the other hand, the lack of investment makes increasing production levels difficult and the geopolitical tensions between Russia and Ukraine also support price increases. In the coming days, the prospects for the OPEC+ meeting, to be held on February 2, might condition the evolution of prices.

On the other hand, a possible invasion of Ukraine by Russia would result in sanctions by the European Union, which could affect gas imports from Russia. For this reason, it is expected that the evolution of the crisis in Ukraine will continue to exert its influence on TTF gas futures prices.

Regarding CO2 emission rights futures prices in the EEX market for the reference contract of December 2022, during the third week of January, they increased until reaching a settlement price of €85.59/t on Thursday, January 20. This price was 6.2% higher than that of the previous Thursday. But on Friday prices fell to €84.47/t.

The current crisis in the energy markets in Europe is having repercussions on the renewable energy projects financing, both due to the regulatory changes that created a certain sensation of legal insecurity, and due to the unfavourable conditions in which large consumers are when signing PPA contracts.

To help provide tools to establish the necessary vision of the future of the market for both investors and large consumers, a special promotion is being carried out at AleaSoft Energy Forecasting during January for contracting long?term price curve forecasting of multiple European markets. These forecasts are hourly with a 30?year horizon, which is essential to analyse storage and hybridisation, mainly with batteries. The service also includes the price captured by solar photovoltaic and wind energy, as well as the confidence bands corresponding to the 15th and 85th percentiles of both the market price and the price captured by renewable technologies, all of them with annual detail.

In addition, the next AleaSoft Energy Forecasting’s webinar, which will take place on February 10, will have the participation of Fernando Soto, Director?General of AEGE, and Juan Puyol, Deputy Director at Cesce, at the analysis table of the Spanish version of the webinar, so it will be a special occasion to analyse the guarantee scheme for electricity sellers through the PPA contemplated in the Statute of Electro?intensive Consumers. Likewise, the usual analysis of the evolution and prospects of the European energy markets will be carried out.

The webinars that are organised monthly at AleaSoft Energy Forecasting since 2019 are a reference space among professionals of the energy sector in Europe for the analysis of the evolution of the markets and of topics of interest and current affairs with the most important companies in the energy sector at European and global level. Companies of the sector in Europe that are interested in participating in an AleaSoft Energy Forecasting’s webinar as speakers or in the analysis table can write to webinar@aleasoft.com.