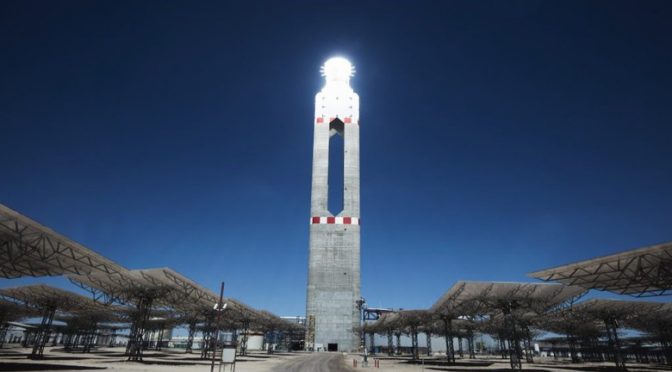 EIG, a leading institutional investor to the global energy sector and one of the world’s leading infrastructure investors, today announced the inauguration of the Cerro Dominador solar complex following a successful synchronization with the Chilean National Electrical System. Cerro Dominador is wholly-owned by funds managed by EIG.

Located in the heart of Chile’s Atacama Desert, one of the best locations in the world for solar generation, the complex comprises a 110 MW CSP plant and a contiguous 100 MW photovoltaic (“PV”) plant that has been operational since 2017. The CSP plant runs on cutting-edge technology that uses solar energy to heat molten salt, which is then stored in large tanks to be used to generate electricity through a steam turbine. This technology provides up to 17.5 hours of energy storage thereby enabling the production of 100% renewable energy 24-hours a day, seven days a week. The complex can offset approximately 640,000 tons of CO2 emissions per year and generate enough energy to power approximately 380,000 homes.

R. Blair Thomas, Chairman & CEO of EIG, said, “We are proud to support this groundbreaking project, which will provide the Chilean national grid with flexible, safe and reliable renewable energy and contribute meaningfully to reducing CO2 emissions in Chile. The project is fully aligned with our ESG goals and priorities and is helping to lay the groundwork for a low carbon future through the production of clean, reliable and cost-effective energy. We are committed to continued investment in future CSP projects in Chile and other parts of the world.”

To commemorate the inauguration of the solar complex, Cerro Dominador hosted a ceremony at the facility that was attended by President Sebastián Piñera of Chile, Juan Carlos Jobet, Chile’s Minister of Energy and Mining, Carolina Schmidt, Chile’s Minister of the Environment, and other leading government officials. Mr. Thomas and Fernando Gonzalez, Cerro Dominador’s CEO, also participated.

EIG is a leading institutional investor to the global energy sector with $21.7 billion under management as of March 31, 2021. EIG specializes in private investments in energy and energy-related infrastructure on a global basis. During its 39-year history, EIG has committed over $37 billion to the energy sector through more than 370 projects or companies in 37 countries on six continents. EIG’s clients include many of the leading pension plans, insurance companies, endowments, foundations and sovereign wealth funds in the U.S., Asia and Europe. EIG is headquartered in Washington, D.C. with offices in Houston, London, Sydney, Rio de Janeiro, Hong Kong and Seoul. For additional information, please visit EIG’s website at www.eigpartners.com.