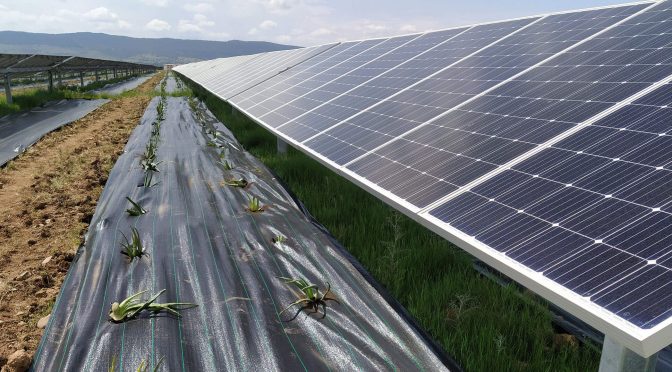 Our global experimental program, which began in January in Europe, continues at the Cohuna photovoltaic plant, in the Australian state of Victoria. Here, an innovation project in partnership with the State Department of Agriculture will establish which are the best pastoral farming plants that can coexist with solar panels, in order to combine energy efficiency and sustainable use of land.

Agrivoltaics, which can be defined as the simultaneous and mutually beneficial use of the same land for agriculture and solar photovoltaic energy, is becoming an increasingly important activity for Enel Green Power. By taking advantage of the Open Innovability® approach, which aims to seek out the best ideas and resources also outside of the company, EGP has entered into a number of partnerships in Europe, particularly in Spain, Greece and Italy, and is now developing an exciting project in Australia. The country, which is blessed with vast quantities of both land and sunshine, is perfect for the production of solar energy, and is considered strategic for the company.

The site in question is near the small town of Cohuna in Gannawarra Shire in the state of Victoria. It’s about 270 kilometres north of Melbourne and  in a rural area. The photovoltaic plant, which covers 82 hectares and which will have a capacity 34 megawatts, is still in the construction phase and is therefore ideal for the development of a feasible agrivoltaic project.

Miriam Di Blasi, EGP’s Head of Environment and Impacts Mitigation – Innovation, reports that various members of the Agriculture Victoria team visited the Cohuna site at the start of April. This marked the beginning of the first phase in the research project, a 12-month “massive monitoring and data-gathering” process covering a range of climate and agricultural questions.  This data will be used in biophysical models in order to establish the best plants for the conditions and sustainable agriculture production. This phase is due to be completed in May 2022. Enel and Agriculture Victoria will use phase one findings to co-design phase two which could include these findings being implemented in the design and layout.

“The collaboration started with Agricolture Victoria is an example of our open innovation approach. Through the design and demonstration of new integration concepts of agriculture with ground mounted PV, we will work together to make PV plants even greener and more sustainable, creating shared value with farmers and communities operating around our plants”.

“We’re immensely proud to partner with Agriculture Victoria for this innovative and industry-leading agrivoltaic project at our Cohuna Solar Farm site. We recognise their outstanding multi-disciplinary science approach via an innovation ecosystem that brings together government, industry, agribusiness and academia. This approach aligns with Enel Green Power’s focus of creating shared value opportunities in the communities where we operate. We’re proactively working with our local stakeholders to explore how we can contribute to building adaptive and resilient agricultural systems through diversified and sustainable use of land at our project sites”.

The program in detail

The research should define the most suitable types of agricultural production for Cohuna. The goal is to develop solutions that can be integrated into the plant without having to modify the layout of the facility or the density of the panels, in such a way that the unencumbered spaces between the arrays can be potentially be utilized for agricultural production of a limited height, which do not risk of shading the panels. Beneath the panels, low-lying pastures and crops can be selected based on the environmental conditions.

The surrounding regional area to the solar farm has sheep grazing and, as we have found at other agrivoltaic sites, their grazing can prevent grass from encroaching on the solar panels. Local crops include cereals, but there are also “low-lying” plants,such as pastures for lamb production. These agricultural productions systems could be integrated with this sort of site, but any the decisions will be made following the results of the research process. Di Blasi is confident that the subsequent design of the plant could provide a “best practice” for agrivoltaic sites in other countries.

EGP’s agrivoltaics research partnerships have already led to changes at our photovoltaic plants in the Northern Hemisphere. Spain is home to several such sites, including Totana in Murcia, Las Corchas in Andalusiaand Valdecaballeros and Augusto in Extremadura. Based on the findings of a partnership with IMIDA (Instituto Murciano de Investigación y Desarrollo Agrario y Alimentario), farmers at Totana recently planted aloe vera, pitaya (dragon fruit), caper, thyme and pepper. At Valdecaballeros, Augusto and Las Corchas, on the other hand, we are working alongside CTAEX (Centro Tecnológico Nacional Agroalmentario Extremadura). This has led to the introduction of aloe vera, rosemary, dandelion and thyme at Valdecaballeros. Medicinal and aromatic herbs will also be planted after the summer at Las Corchas, while alfafa will be seeded at Augusto in November.

We are involved in a similar project also in Greece, at Pezouliotika photovoltaic plant, working with the Eliante non-profit organization, and Kourtesi in Elis, where our partner is the Novamont company. Here seeding will take place in May, June and October. Finally, we are testing in Italy, along with The University of Tuscia combinations of plants that attract pollinating insects, at the Bastardo and the Montalto di Castro thermoelectric plants, both currently being decommissioned.

These activities have been developed in line with the principles of the circular economy, in which everything is recycled or reused and nothing is wasted. Agrivoltaics is a further example of our belief that innovabilityshould cover all areas of human activity, and not just renewable energy. This is what we call a Just Transition.