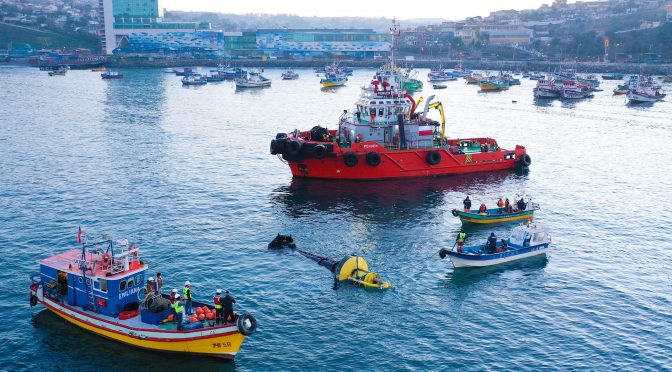 How is energy generated from the movement of the sea? A new EGP experiment has just kicked off, in Chile. Latin America’s first wave energy converter will provide key information in exploring this potential source of energy.

Surfers call them spots: those locations where the biggest waves break for the best possible ride, and where it’s possible to get maximum energy from the sea’s power to defy gravity on the surface of the water. But the movement of these powerful waves can also be used for another ambitious objective: to produce clean energy.

And this is what’s happening in Las Cruces, in the Valparaiso region of Chile, on the Pacific Ocean. A few days ago a surfing spot became home to Latin America’s first wave energy converter. It was installed by Enel Green Power at the beginning of April as part of the Marine Energy Research and Innovation Center’s (MERIC) Open Sea Lab project.

By virtue of its microclimatic conditions, this site in Chile is one of the most promising in the world, since it’s characterized by constant waves which are ideal for being converted into electricity. The PB3 PowerBuoy, as the innovative system produced by the American company Ocean Power Technologies is called, was developed precisely with the aim of exploiting this constant wave movement to generate electricity. But how?

How does the “boya generadora” work?

The device is shaped like a huge buoy measuring approximately 14 meters in height – only three meters of which is above the surface – and weighing nearly 10 tons. It has been positioned more than a kilometer off the coast, it’s anchored to the sandy seabed, and has a 50 kWh battery system inside it. Naturally, it is designed to ensure that it doesn’t produce any waste or have any kind of impact on the Ocean habitat.

Thanks to the continuous movement of the sea, theboya generadora bobs up and down on the surface of the water, transforming the energy of the wave movement into electricity that then goes to power a series of oceanographic sensors that have been put in place to monitor the underwater environment. However, it’s not just about producing electricity, it’s also about analyzing and gathering information to better understand the behavior of the waves and the ocean, to study and optimize the potential of using the oceans to produce renewable energy.