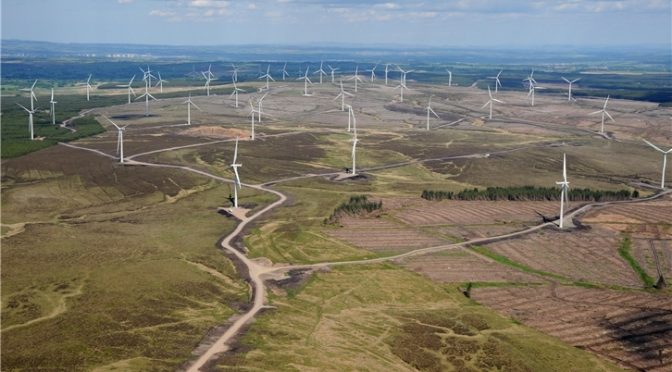 A planning application to deliver the UK’s largest electrolyser has been submitted by ScottishPower, Iberdrola subsidiary. The 20MW electrolyser will be the key component of a green hydrogen facility located close to ScottishPower’s Whitelee windfarm (539 MW).

The planning application also includes proposals for a combined solar, up to 20MW, and battery energy storage scheme, up to 50MW, to help power the electrolyser. The new facility will be able to produce up to 8 tonnes of green hydrogen per day, roughly equivalent to fuelling over 550 buses to travel from Glasgow to Edinburgh and back again each day.

It will be the first project to be delivered by Green Hydrogen for Scotland, a partnership between ScottishPower, BOC and ITM Power, to create green hydrogen production facilities with clusters of refuelling stations across Scotland. Green hydrogen is a zero-carbon energy source which can be used by industries and companies that cannot fully electrify their operations to help them lower their emissions, for example, heavy duty transport like buses and bin lorries.

The partnership’s first project, ‘Green Hydrogen for Glasgow’, is designed to provide carbon-free transport and clean air for communities across Glasgow. The city, set to host the United Nations 26th Climate Change Conference, COP26, later this year, aims to become the first net-zero city in the UK by 2030 by creating, among other initiatives, a zero-emission vehicle fleet, using only electric and hydrogen-powered vehicles

The proposed green hydrogen project will be led by ScottishPower and located on the outskirts of Glasgow. The project will be engineered and operated by BOC, using wind and solar power produced by ScottishPower Renewables, and incorporate a 20MW electrolyser, delivered by ITM Power. Decision on the planning application is expected by the end of autumn 2021 and the project aims to supply hydrogen to the commercial market before 2023.

Barry Carruthers, ScottishPower’s Hydrogen Director, said: “Whitelee keeps breaking barriers, first the UK’s largest onshore wind farm, and soon to be home to the UK’s largest electrolyser. The site has played a vital role in helping the UK to decarbonise and we look forward to delivering another vital form of zero carbon generation energy at the site to help Glasgow and Scotland achieve their net zero goals.”

Barry explained that “green hydrogen is a sustainable energy source that can provide clean, renewable energy for industries, heavy transport and companies for decades to come.”

Graham Cooley CEO ITM Power, commented: “This is an exciting milestone based on market development for green hydrogen for the city of Glasgow, that will see the UK’s largest electrolyser deployment to date being realised in Scotland.”

Mark Griffin, Hydrogen Market Development Manager for Clean Fuels at BOC said: “The scale of this project demonstrates the growing demand for clean hydrogen and as a member of the Green Hydrogen for Scotland partnership, we’re delighted to bring our hydrogen mobility and refuelling project expertise to help deliver a ground-breaking facility in Glasgow.”

Iberdrola is currently developing the most ambitious green hydrogen projects in Europe, which will enable the decarbonisation of industry and transport or heavy mobility in countries such as Spain and the United Kingdom, as well as developing the supply chain. The company has submitted 53 projects to the Next Generation EU programme, which would activate investments of €2.5 billion to achieve an annual production of 60,000 tn/year.