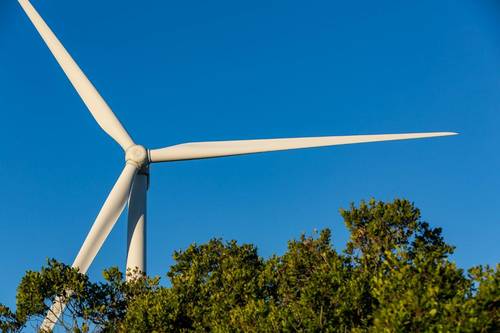 On October 30, the Ukrainian company WindFarm and the Chinese company PowerChina signed a contract on the joint implementation of a project for the construction of an 800 MW wind farm with a capacity of over $1 billion in Manhush and Nikolske districts of Donetsk region, Board Chairman of the Ukrainian Wind Energy Association (UWEA) Andriy Konechenkov has said.
“The specifics of this project is that it does not provide for a feed-in tariff. This is the first robin in the electricity market, the first project that will compete with conventional generation in real conditions,” he told Interfax-Ukraine.
At the same time, according to him, the project provides for local content policy or local components, which gives rise to the development of national wind energy production.
“How the payment for this local component will be carried out remains to be decided,” Konechenkov said.
He also said that the Chinese company is participating in this project “as an investor in a large, transparent project that does not depend on the ffeed-in tariff,” which, according to him, has already exhausted itself given the crisis of non-payments.
“It is necessary to start working on new technologies. Moreover, the issue is related to the reintegration of the regions, the launch of new environment-friendly production,” the board chairman of the UWEA said, noting that investors are currently not considering the possibility of participating in “green auctions” due to weak predictability of conditions and timing of their implementation.
At the same time, he expressed the hope that the experience and capabilities of the Chinese investor will contribute to the implementation of the project as soon as possible, noting that PowerChina is ready to work on the basis of the support of a domestic manufacturer and financing of European wind turbines.
Konechenkov said that this project, which has been in preparation for about a year, will become the largest onshore wind farm in Europe.
According to the data on the UWEA website, PowerChina, which specializes in the design and construction of energy and transport facilities, is in the top 100 largest companies in the country and in the top 500 largest companies in the world. In particular, it owns the Three Gorges, the world’s largest hydroelectric dam with a capacity of 22.5 GW.
The WindFarm team has developed a portfolio of wind power plants with a total capacity of 1.3 GW, of which more than 400 MW have already been put into operation.
Both companies are members of the UWEA.