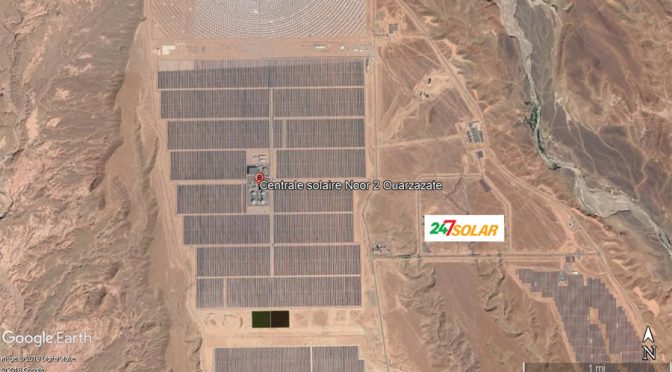 Great Falls, VA, USA  247Solar Inc., developer of the breakthrough 247Solar Plant, announced that it has signed a supply agreement with Chinese engineering and manufacturing firm CASEN Investment Co. (formerly DK Solar) to provide  their heliostats (solar mirrors) and associated control systems for its first operational demonstration plant, under construction in Ouarzazate, Morocco. The Plant is being deployed in collaboration with Masen, the Moroccan Agency for Sustainable Energy, at Masen’s Noor-Ouarzazate Complex, the world’s largest concentrating solar power (CSP) facility.

CASEN’s innovative mirrors include several unique design features. Most heliostats are stowed at night with their mirrors facing the sky. This can cause the mirrors to be soiled by a sticky mix of moisture (dew), dust, and air pollution. They also are subject to adverse weather, including sandstorms and hail. In much of the Middle East, for example, great expense usually is required to clean the hard-to-remove dirt from the mirrors that’s been deposited at night.

In contrast, CASEN’s heliostats are stowed at night with their mirrors facing down, avoiding these serious and expensive problems.

“CASEN’s unique technology will be a significant contributor to the low CAPEX and O&M costs and to the rapid deployment that are hallmarks of our modular, scalable 247Solar Plants,” says Bruce N. Anderson, CEO. “We look forward to showcasing their capabilities as part of our demonstration plant in Morocco, which we expect to be operational later this year.”

CASEN’s President, Mr. Zhu Zhili, adds, “247Solar Plants are the next big leap in clean energy, and so they are an ideal application for our next-generation heliostats. We greatly look forward to a mutually beneficial and long-term relationship as they deploy 247Solar Plants around the world.”

247Solar Plants are a turnkey solution for producing baseload, clean electricity around the clock at costs competitive with PV plus batteries today and with coal tomorrow at scale. They eliminate most disadvantages of conventional CSP, PV, wind, and traditional power technologies with a hot-air-driven Brayton Cycle system that operates at atmospheric pressure and requires no steam, molten salts, or heat transfer oils.

Unlike large, custom-engineered, first-generation CSP projects, 247Solar Plants are standardized systems, each of 400 kW capacity, scalable from a single Plant off-grid to utility-scale farms of virtually unlimited capacity. 247Solar Plants use factory-made components, most of which can be manufactured locally, with few moving parts, for low maintenance and rapid, low-cost plug and play deployment.

The 247Solar Thermal Storage System stores up to 15 hours of the sun’s energy as heat instead of electricity, using simple firebrick or ceramic pellets instead of molten salts for reduced cost and complexity. To guarantee electricity on demand, the Plant’s turbines can also burn a variety of fuels.

247Solar Plants offer outstanding grid reliability and resilience with no requirement for emergency backup. They provide battery-like response to grid voltage and demand fluctuations, mitigating intermittency from other renewables.

The technology was originated at the Massachusetts Institute of Technology (MIT), with initial funding from the US Department of Energy and development assistance from the German Aerospace Center (DLR), WorleyParsons, Fraunhofer Institute, and Saint Gobain.

247Solar, Inc. was formed in 2015 by solar industry pioneer Bruce Anderson to commercialize the 247Solar Plant, invented by a spinoff of MIT. The company has signed agreements to deploy its technology with power project developers throughout the world.