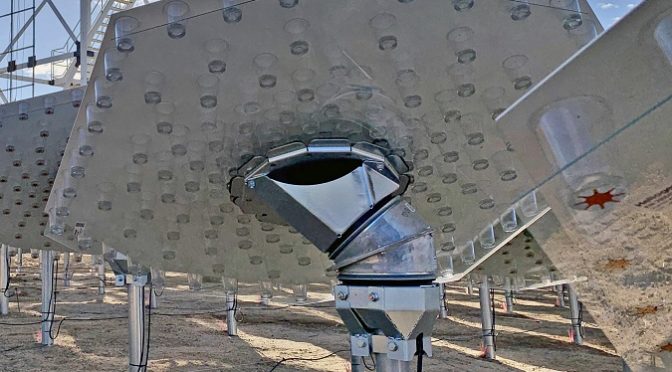 Heliostats can represent half of the capital costs of a Concentrated Solar Power plant and misalignment can severely impact performance. Alignment issues become more significant for larger projects due to the greater distances between heliostat and solar thermal tower.

At NRG Energy’s giant 377 MW Ivanpah tower plant in California, online since 2014, heliostat positioning problems caused by soiling and windstorms contributed to the facility missing production targets in its first 24 months of operations. In 2016, misaligned heliostats caused a fire in a section of one of the plant’s towers, reducing output by a third for over a month.

A number of technology teams are now using the latest camera and automation tools to develop self-calibrating heliostat systems.

These solutions are set to have multiple benefits, accelerating construction times and improving plant performance, and could be deployed within a year, developers told New Energy Update.

PHOTON, a 2 million-euro ($2.2 million) project in Europe led by Spain’s Tewer Ingenieria, has integrated self-calibration into a new heliostat design.

The system achieves an enhanced optical quality of 0.6 milliradian (mrad) deviation, compared with 2 mrad deviation for existing state-of-the-art heliostat models. The partners have integrated the technology with an autonomous wireless communication system, powered by PV, to provide self-calibration.

The heliostat learns its applicable kinematics by following the sun with a sensor built into the facet plane, Jose M. Blazquez Serrano, Project Engineer at Tewer, said.

The system removes the need for foundations, trenches and wiring in the heliostat field, reducing costs, he said.

Based on modelling at ACWA Power’s planned 100 MW Redstone tower project in South Africa, the system can reduce capex by 29.7% and cut opex by 8.8%, reducing the overall levelized cost of energy by 11.9%, Blazquez said.

«We estimate that by Q4 this year we will have accumulated sufficient operating hours to demonstrate the solution,» he said.

A camera is attached to a low-cost heliostat and oriented to several targets placed in known positions, enabling the camera to compare actual and expected position. This process is repeated for several positions to produce the data to allow the heliostat to modify the tracking commands. The procedure can be automated so that no human interaction is required.

Tests have confirmed accuracies «better than 0.25 mrad,” and the final cost including required hardware would be «less than current offerings,» Villasante said.

The system has already been demonstrated within several heliostats and the partners are looking to work with suppliers to develop a more «industrialized» and integrated solution, he said.

Backed by Bill Gates, Heliogen has developed an autonomous system that calibrates heliostats based on a «closed-loop» algorithm.

“We can achieve high pointing accuracy (sub-milliradian normal vector errors) with a comparatively low-cost drive system, because the closed-loop controller can correct for nonlinearities and other manufacturing variability that an open-loop controller would find difficult or impossible to correct,” Fatimah Bello, VP, Business Development & Product at U.S. CSP start-up Heliogen, said.

“Our system eliminates the long process of calibration for the heliostat field – it’s a matter of hours to days to get the field up and running, not months,” Bello said.

“One of the key benefits pursued with this technology is strong focus to speed up and drive down costs during the start-up and commissioning of the solar field,” Blazquez said.

All of the developers see opportunities for retrofitting their self-calibrating heliostat technology to existing plants, although the cost-benefits would differ between the solutions and depend on site-specific factors.

Heliogen sees immediate opportunities for new CSP projects that supply heat to industrial facilities with restricted land availability. By increasing the accuracy of the heliostats, smaller heliostat fields can be proposed at lower cost, Bello said.

“Just recently we were able to propose a heliostat field that was almost 20% smaller than the customer expected,” she said.

Heliogen is currently examining projects with payback periods of as low as two years, Bello said.