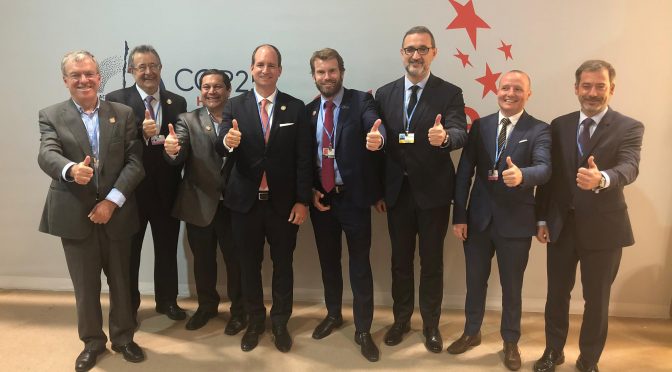 Luis Crespo, president of Protermosolar: «The union of these 12 associations will allow sharing experiences and good practices on energy technologies and policies to accelerate renewable deployment in Latin America».

Protermosolar, the Spanish Association for the Promotion of the Solar Thermal Industry, has joined, together with 12 other associations, the signing of the Ibero-American commitment to promote clean energy, which has been signed by organizations from Argentina, Brazil, Chile, Colombia, Ecuador, Mexico, Peru, Uruguay and Spain. This agreement has been concluded within the framework of the United Nations Conference on Climate Change, commonly referred to as COP25.
Luis Crespo, president of Protermosolar, said: “The union of these 12 associations will allow us to share experiences on technologies and support policies to accelerate renewable deployment in Latin America in an efficient and balanced way. The complementarity of the renewable resource, both in meteorological terms by season and hours, thanks to the solar thermal system that can dispatch its production daily after sunset thanks to its storage, can contribute to a more accelerated deployment than is usually considered in the planning in the framework of the Energy Transition”.

The agreement, ratified by a large number of international organizations, has as main objective to share the strategic lines of action and define recommendations for the development of the regulation that could be more effective in each of the adhered countries, with the purpose of taking advantage of the advantages of renewables and promote their greatest possible participation in final energy.
Under this context, the signing of the agreement is a sign of the firm commitment of renewable associations to consolidate an international network so that the actions developed serve as axis guides and become a focus of attraction for other global organizations.
The president of Protermosolar, added: “The adhesion of Protermosolar to the Ibero-American agreement is a sign of our commitment to ensure that renewables accelerate their contribution at international level taking into account the complementarity between different technologies, which will allow achieving more ambitious objectives».

Activities developed by Protermosolar at COP25

During the ESTELA conference at COP25, held on December 4, Solar Thermal Energy: an essential building block for the energy transition, the president of Protermosolar highlighted the essential role of solar thermal energy for the energy transition, the resolution of the storage challenges and the necessary participation of solar thermal to achieve the objectives of the Paris Agreement through intelligent decarbonization.

Along the same lines, the conference starring Raúl García, Secretary General of Protermosolar, on December 4, Solar Energy, Climate Change and 5 Sustainable Development Goals, showed how solar thermal will contribute to electricity production thanks to its energy storage capacity and its total manageability and firmness, as specified and verified in the report prepared by Protermosolar itself, called Energy Transition to 2030.

The president of Protermosolar also participated in the event organized by GEIDCO, on December 6, at the IPCC stand, whose main theme was the contribution of the development of transmission infrastructures to the mitigation of climate change and how solar thermal technology can take advantage of these developments providing manageability and optimized dispatch profiles to regions where the direct radiation resource was not sufficient to build a solar thermal power plant. The example of how to provide solutions to the Central European countries thanks to solar thermal power plants with storage in southern Europe was very prominent in this event.

Protermosolar also actively participated in networking around the events of December 11 of the GIZ, in the Chilean pavilion, on the role of solar thermal in that country, as well as in the event organized in the ICEX on DEWA initiatives in Dubai, where the world’s largest solar thermal project is being built at competitive prices.

Another day in which Protermosolar has participated in COP25, was held on December 6, Technological Platforms, which focused on the adoption of renewable energy technologies and was conducted by the technological platform of the solar thermal sector SOLAR CONCENTRA, which coordinates Protermosolar.

Finally, the president of Protermoslar participated on December 12 in an event organized by Ecotopía Ambiental in the Civil Society and Youth module, in which he highlighted the extraordinary importance of the proposed value of solar thermal power plants, which allow the generation of energy from the sunset, complementing the photovoltaic and avoiding the backing of fossil fuels.