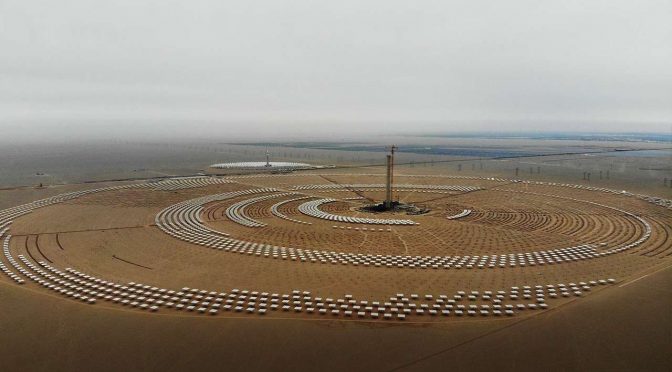 Moreover, another 4 CSP demonstration projects are on the last stage of construction and will be connected to the grid soon by the end of this year in 2019 or middle of next year in 2020.

As a matter of fact, China becomes the biggest contributor in global new CSP projects’ development in the last two years, and the market is getting experienced with such a number of built-up commercial plants.The Chart below lists the projects:

Pic. Summary of China Large-scale Commercial Projects in operation or will be completed soon

Get fully learned of the current situation of China 1st batch of CSP demos and other projects, you may:

Molten salt melting work started on November 22, 2019, and expected to be connected to the grid by the end of 2019 this year. 2. CSNP Royal Tech Urat 100MW Parabolic Trough CSP Project

Installation of solar field was completed on November 15, 2019, and TES system is coming to an end. Expected to be operational early next year in 2020. 3. CPECC Hami 50MW Molten Salt Tower CSP Project

Molten salt melting work started, and expected to be connected to the grid by the end of 2019 this year.4. Yumen Xinneng 50MW Molten Salt Tower CSP Project

Module No.1 was commissioned, and Modules No.2-10 are under construction. Three modules are expected to be completed in near future.

Get fully learned of the current situation of China 1st batch of CSP demos and other projects, you may:

As a leading global concentrated solar power (CSP) industry consultancy, CSP Focus will have the 10th Annual CSP Focus China brand event for the upcoming 2020 in Beijing on March 25-26. At the time of ten years’ anniversary, CSP Focus China 2020 event will organize post-conference CSP project site tour as well to bring the participants a comprehensive and professional platform to experience China CSP industry.