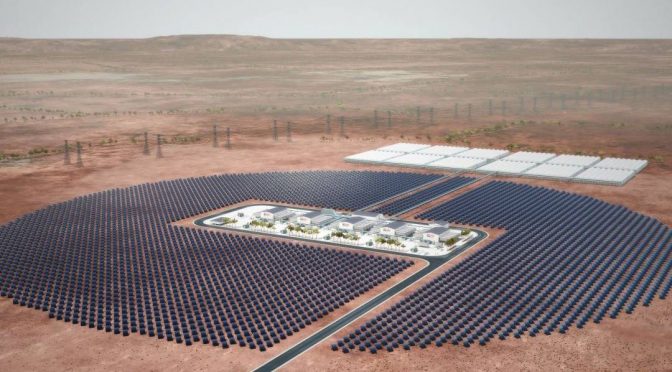 Port Augusta’s failed solar thermal project has been revived by a South Australian company with big plans for the ill-fated Aurora site.

The $2 million deal will see the company build up to 400 MW of solar PV on the site, and install its own TESS-GRID technology,.

According to 1414 Degrees, the TESS-GRID technology has the capacity to buy and store electricity generated by other renewable farms on the high voltage transmission network in the region.

1414 Degrees Executive Chairman Dr Kevin Moriarty said the site had several clear advantages for the development of the TESS-GRID solution.

«The unregulated high-voltage transmission line to the OZ Minerals Carrapateena and Prominent Hill mines is being constructed along the boundary of the Aurora Solar Energy Project, and provision has been made for a substation at the existing Aurora site with direct connection to the Davenport substation in Port Augusta,» he said.

«Davenport is part of the major transmission networks to Eyre Peninsula, Adelaide and the new interconnector to New South Wales.

«This project is currently not impacted by marginal loss factors (MLF) that have constrained output from renewable farms in remoter parts of the national grid,»

«We will reopen negotiations with OzMinerals and ElectraNet as soon as the acquisition is complete.»

The Aurora Solar Energy Project has state government development approval for a 70 MW solar PV farm and 150 MW of generation from a concentrated solar power plant.

The $650 million plant, which would have bee the largest of its kind in the world, sparked new hope for the former coal city after the closure of the Augusta Power Station in 2016.

The project was scrapped in April this year after SolarReserve failed to secure commercial funding.

The city however, continued to champion itself as the renewable capital of Australia,

The Aurora Solar Energy Project will be developed and financed in the subsidiary company, and 1414 Degrees will control and manage the Project.

«We’ve had a lot of interest from infrastructure and investment funds seeking to invest in the potential of our technology and this large solar farm will generate significant revenues while supporting the staged development of our large-scale energy storage technology,» he said.

The advanced status of this project is expected to result in early revenues from energy sales. We will avoid high capital requirements by staging the development.