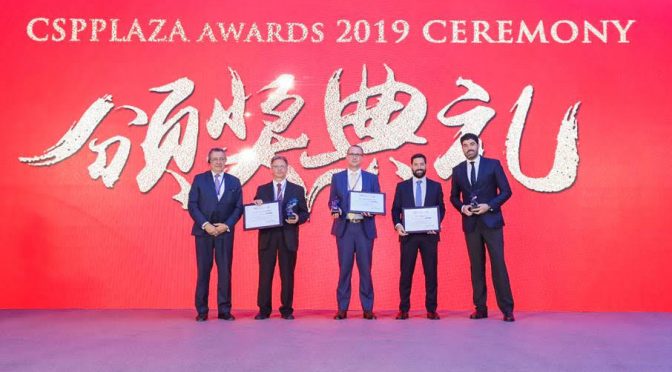 This is an annual prize, awarded within the framework of the CSPPlaza 2019 conference, which recognizes companies that have made major breakthroughs in Concentrated Solar Power technological innovation and application over the past year.

The company was awarded thanks to the results obtained in a new type of parabolic trough collector, developed by Abengoa and used in its Xina Solar One plant: The SpaceTube 8.2.

Abengoa (MCE: ABG/P:SM), the international company that applies innovative technology solutions for sustainability in the infrastructures, energy and water sectors, has been awarded with the CSP Technology Innovation award by the Chinese media CSPPlaza within the framework of the international reference conference organized by this media.

The one in charge of presenting the award was Luis Crespo, president of Protermosolar, who highlighted in his speech the technical capabilities of Abengoa and the professionalism of its human team. On behalf of the company, Miguel Mendez, head of Solar Technology, and Alberto Alba, head of Business development in Asia and responsible for Strategic Alliances, were presented this award which recognizes companies that have made major breakthroughs in technological innovation and application over the past year.

In the case of Abengoa, the company was awarded for the innovative works and excellent results of the new generation of parabolic trough collector, developed by Abengoa, Spacetube 8.2++, with 8.2m aperture width which makes it the trough collector with biggest aperture in current commercialized application. Its innovative design resulted in important improvements regarding its optical accuracy, optimization of assembly and a reduction in manufacturing and installation costs.

This through collector can be find in Xina Solar One, built and operated by Abengoa in South Africa. This is a 100 MW solar thermal plant with a 5.5 hours thermal storage system which allows it to meet the country electricity demand peaks with renewable, sustainable and dispatchable energy. In addition, this is the collector that is being installed in the phase IV of the largest solar complex in the world, the Mohammed bin Rashid Al Maktoum Solar Park in Dubai owned by DEWA (Dubai Electricity and Water Authority), and in which Abengoa is responsible for the design, construction and commissioning of solar technology and a solar field of parabolic trough collectors of 3 x 200 MW, with 12 hours of molten salt storage.

These recognition is a proof of the world leader position hat Abengoa holds in the solar sector having constructed solar plants in four continents with an installed base of 1.7 GW, which represents the 34 % of the worldwide production.

The annual conference CPC Plaza, organized by CSP Plaza, is being held in Suzhou (China) this week (10-12 July). This edition is focuses on the constitution of a global solar thermal community that fosters close collaboration of the solar thermal industry in order to meet new challenges, establish common goals and achive common development.