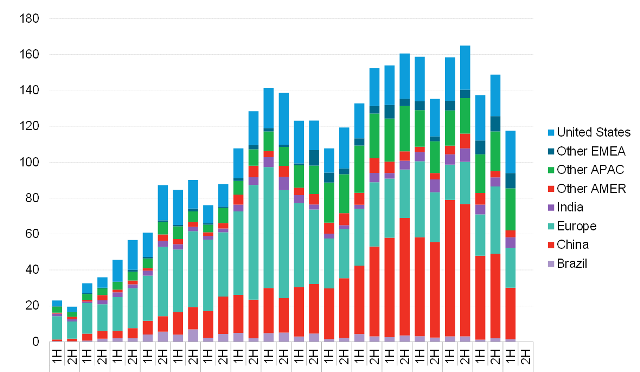 Renewable energy investment dropped 14 percent to $117.6 billion in the first half of 2019, according to the latest figures from BloombergNEF (BNEF).

The report said renewable energy investment in the world’s biggest market, China, fell 39 percent to $28.8 billion, the lowest figure for any half-year period since 2013.

“We expect a nationwide solar auction happening now to lead to a rush of new PV project financings. We could also see several big deals in offshore wind in the second half,” Justin Wu, head of Asia-Pacific for BNEF, said.

Renewable energy investment in the Netherlands fell 41 percent to $2.2 billion.

Renewable energy investment in the U.K. rose 35 percent to $2.5 billion.

The report said the other highlight of clean energy investment was the financing of big projects in two relatively new markets.

A solar thermal and photovoltaic complex in Dubai, at 950MW and $4.2 billion, and two offshore wind arrays in the sea off Taiwan, at 640MW and 900MW — an estimated combined cost of $5.7 billion – received funding.

The Dubai deal in late March, for the Mohammed bin Rashid Al Maktoum IV project, is the biggest financing ever seen in the solar sector. It involves $2.6 billion of debt from 10 Chinese, Gulf and Western banks, plus $1.6 billion of equity from Dubai Electricity and Water Authority, Saudi-based developer ACWA Power and equity partner Silk Road Fund of China.

Offshore wind activity is broadening its geographical focus, from Europe’s North Sea and China’s coastline, toward new markets such as Taiwan, the U.S. East Coast, India and Vietnam, BloombergNEF said.