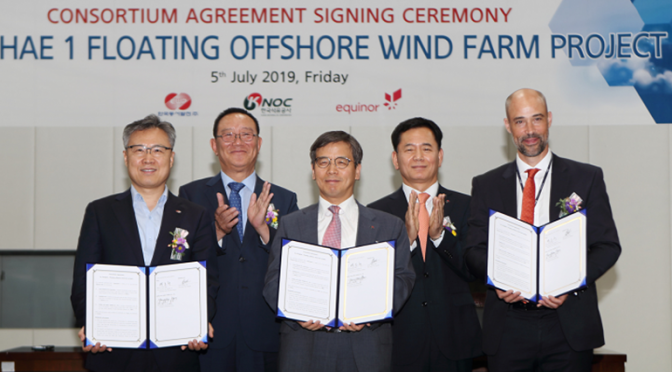 Equinor, Korea National Oil Corporation (KNOC) and Korea East-West Power have agreed to develop to 200MW floating offshore wind farm 58 km off the coast of the city of Ulsan.

The consortium recently held a signing ceremony in Ulsan, which is situated in the south-eastern region of South Korea for the Donghae 1 project.

A feasibility study based on the augmented data collected by Korea Petroleum Corporation, which owns the Donghae gas field platform, has been conducted.
Construction work is expected to start in 2022.

Ulsan’s senior Song Cheol-ho who attended the signing ceremony congratulated the consortium and said he hoped floating wind would be a “new growth engine” for Ulsan in the future.

Earlier this year, KNOC and Equinor signed a memorandum of understanding for the project.

KNOC is 100% owned by the South Korean state and has a mandate to ensure the country’s energy security.

South Korea plans to increase its renewable energy generation share to 20% by 2030, which translates to a target of 49GW of new clean power capacity by 2030, Equinor said.