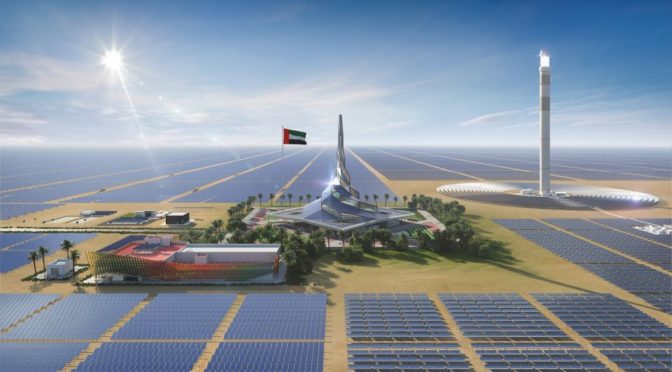 The spanish company Refractaris participates in the construction in Dubai of the tallest solar tower in the world. With a height of 260 meters and capable of generating 100 megawatts, the solar thermal project is expected to be fully operational by the end of 2020.

The tower is part of a hybrid project that includes a 250 megawatt photovoltaic power plant and a concentrated solar power (CSP) of 700 megawatts, whose EPC contractor is the Chinese company Shanghai Electric and in which the Cordoba company participates. The project – which will be developed as part of the fourth phase of the Mohammed Bin Rashid Al Maktoum Solar Park – will be the largest concentrating solar thermal power plant in the world, combining solar tower (CSP) and parabolic trough technologies. Refractaris has been awarded the engineering and manufacture of the thermal shield of protection of the central tower of the project, called Noor Energy 1, located in the United Arab Emirates, 50 kilometers south of Dubai, which highlights the great commitment of the Arab country for solar thermal energy. Refractaris has recently completed the construction of two thermal shields of international CSP (Concentrated Solar Power) projects such as Cerro Dominador in Chile or Luneng HAIXI in China. http://helionoticias.es/refractaris-participa-en-la-construccion-de-la-torre-termosolar-de-dubai/ 25-06-2019|Categories: Concentrated Solar Power, CSP, Dubai, Emiratos Árabes Unidos, Noor Energy 1, Refractaris, Shanghai Electric, termosolar, torre, tower, United Arab Emirates
http://helioscsp.com/refractaris-participates-in-the-construction-of-dubais-concentrated-solar-power-tower/
http://helioscsp.com/dewa-receives-30-eoi-for-200-mw-concentrated-solar-power-plant/