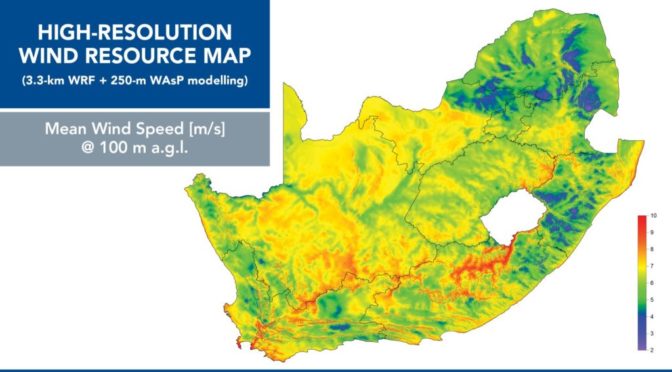 The Acting Director-General of the Department of Energy (DoE) has launched the Wind Atlas for South Africa (WASA) High-Resolution Wind Resource Map, which for the first time covers all nine provinces of South Africa.

The atlas was launched at the WASA 2 Final Seminar hosted at the East London International Convention Centre (ELICC) in the Eastern Cape.

Addressing seminar delegates, the aDG emphasised the importance of accurately determining the availability of wind: “As we continue on our ambitious renewable energy path, wind energy remains an integral part of this goal. However, it would be difficult to plan thoroughly for the increased uptake of wind energy if one does not have certainty on wind resource availability.” Watch: Growth of the global wind market

“Therefore, the need for reliable, accurate and representative data on wind is critical. It is for this reason that the Department of Energy undertook to complete WASA.”

The launch coincided with the ten-year-anniversary of the WASA project. WASA is a project of the South African Wind Energy Project (SAWEP) with the DoE as the Executing/Implementing Partner and funded by the Global Environment Facility (GEF) through the UNDP country office support, with project management by SANEDI. Read more: SA wind industry to promote economic growth.

The acting Director-General commented that the latest iteration of the IRP (Integrated Resource Plan), though still in draft, will demonstrate SA’s continued commitment to investing in renewable energy. “The Renewable Energy Independent Power Producer Procurement Programme (REIPPPP) initiative has resulted in the procurement of 6.3 GW of new renewable energy capacity to date, with 3.9 GW already online. The transparent and competitive bidding nature of the REIPPPP has been the main driving force behind the reduction in costs of these renewable energy projects.”

The aDG further said: “solar PV and wind have seen the most rapid decline in costs which are now competitive with conventional power generation sources. Solar PV costs have declined over 80% since 2011, while onshore wind has achieved around 60% cost reduction.”

“As you might be aware, the draft IRP proposes a significant share of the new generation to be from renewable energy. While the final IRP is awaited, I am confident that the outcome will provide further scope and impetus for further price reduction in renewable energy.”

The WASA Large-Scale High-Resolution Wind Resource Map available at http://www.wasaproject.info/ shows detailed information of the surface wind across South Africa such as mean surface wind speed that assists planners, wind farm developers and others to identify areas for wind exploration.

Through the implementation of WASA, the country has established critical and quality wind measurement infrastructure in five provinces:

Subsequently, four additional wind measurement stations were erected in the beginning of September 2018 in the Northern Cape Province under WASA 3 and this is scheduled for completion by 2020. This brings the total number of WASA wind measurement stations in operation to 18 spread across five provinces, which cover an estimated 75% of SA’s land cover. Effectively, WASA 1, 2, and 3 constitute the building blocks of the wind atlas that covers the whole of SA.

The WASA 2 Seminar also coincided with the ten-year-anniversary of the WASA project, providing an opportune time to celebrate the ground-breaking achievements of the project over the years. Other WASA 2 Seminar topics included results from WASA 2, application and introduction to WASA 3.

The audience was informed that WASA constitutes one of the most critical elements of South Africa’s renewable energy efforts and enables the country to contribute to the Global Renewable Energy Atlas led by the International Renewable Energy Agency (IRENA).

Thanks to WASA, the country has developed an excellent wind resource assessment capability at key public institutions, namely CSIR, South African Weather Service (SAWS) and the University of Cape Town (UCT), which allows for the planning of large-scale exploitation of wind power in South Africa with much needed knowledge and skills transfer.