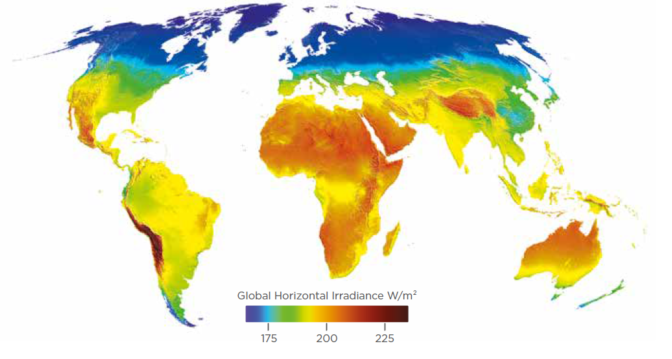 This baseline scenario includes 1.9 GW of new capacity in China, 1 GW of new projects in Morocco and South Africa, 1 GW in the Middle East and the remainder in Australia and Chile.
Under an accelerated growth scenario with faster development of announced projects, Concentrated Solar Power installations could rise by a further 2.6 GW over the next five years, the IEA said.
Saudi Arabia aims to build 2.7 GW of Concentrated Solar Power capacity by 2030 in a new plan set out by the government on January 9, local media reported.
Saudi Arabia is looking to reduce its reliance on hydrocarbons as part of a wider plan to diversify its economy.
In total, Saudi Arabia plans to build 58.7 GW of renewable capacity by 2030, including 40 GW of PV capacity and 16 GW of wind, the reports said. Some 27.3 GW of this capacity would be built by 2023. This is far higher than Saudi Arabia’s previous target of 9.5 GW by 2023, which included 1 GW of CSP.
http://helionoticias.es/se-pronostica-que-la-termosolar-crecera-un-87-o-43-gw-en-2018-2023/
http://helioscsp.com/concentrated-solar-power-capacity-is-forecast-to-grow-by-87-or-4-3-gw-in-2018-2023/