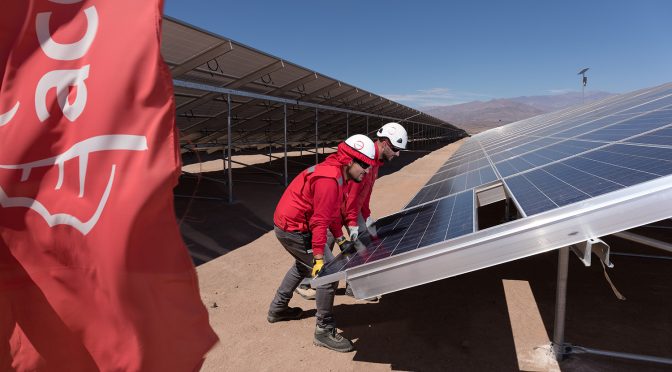 The National Mining Company of Chile (ENAMI) has awarded ACCIONA Energía its electricity supplies from renewable energy sources starting in April 2018, under a long-term deal. The PPA contract will cover 100% of the electricity consumption of ENAMI’s plants, for which ACCIONA will build a new photovoltaic plant in the north of the country.

Power will be supplied to the plants that ENAMI operates in the regions of Antofagasta, Atacama and Coquimbo, and the agreement also covers the consumption related to the modernization of the Fundición Hernán Videla Lira foundry located in the town of Paipote, starting in 2022.

The energy purchase and sale contract was signed yesterday in the El Romero Solar photovoltaic plant – owned by ACCIONA – by representatives of the two companies in the presence of authorities from the Region of Atacama. Among those present were the Mayor Alexandra Nuñez and the regional Ministerial Secretaries (Seremis) of Mining and Energy.

In 2022, when all ENAMI’s plants will be supplied by ACCIONA, the 100% renewable energy will avoid the emission of more than 300,000 tonnes of CO2 to the atmosphere equivalent to emissions from thermal power plants, based on the country’s energy mix.

“Helping the National Mining Company of Chile to achieve 100% renewable consumption gives us great satisfaction, due to the importance of the client, the sector it operates in, and because it strengthens our position in the corporate PPA market in the country”, says ACCIONA Energía CEO for South America Ignacio Escobar. “The agreement also enables us to increase our photovoltaic capacity in Chile, which represents a major milestone in our development activity”, he adds.

Jaime Pérez de Arce, Executive Vice-president of ENAMI, states that “this contract is part of the modernization that we are driving forward in ENAMI. This is very important for us, as it demonstrates our commitment to the sustainable development of the Company and the country”. He adds that “the new emission-control technology that we will incorporate in the foundry at Paipote, plus the fact that all our plants are supplied with clean energies, places us among the companies with highest environmental standards in the sector”.

ACCIONA has two renewable facilities currently in operation in Chile: the 246-MWp photovoltaic plant in the Atacama Desert and the 45-MW Punta Palmeras wind farm in the region of Coquimbo. It is now building a second wind farm – San Gabriel, with a capacity of 183 MW- in Araucanía.

The agreement with ENAMI took place following the award of a public tender in which 14 power generation companies took part. The energy to be supplied by ACCIONA will come from new photovoltaic facilities that the company will build in Chile. The assigned plant (or plants) will be selected from the portfolio of photovoltaic projects that ACCIONA has in the northern zone, giving priority to those located in the region of Atacama.

In Chile, ACCIONA Energía ha signed three other major purchase and sale contracts for renewable energy to data with corporate customers in Chile, such as those signed with Google to supply its data center, and with the distribution chain Falabella to supply around one hundred stores belonging to the group and its subsidiaries, and with the concession company of the integrated water cycle in Atacama, Aguas Chañar, for its facilities in the region.

The company has also signed supply contracts with all the distributors and cooperatives in the country as a result of the energy tender process for consumption by regulated customers, known as “Tender 2013/03 – 2nd call” and “Tender 2015/01”.

It belongs to the ACCIONA Group, a leader in sustainable solutions for infrastructures and renewable energy projects worldwide. Its range of services covers the entire value chain of design, construction, operation and maintenance. The company earned revenues of 7,254 million euros in 2017, has a presence in more than 40 countries and carries out its activities within a commitment to the economic and social development of the communities it operates in. ACCIONA’s aim is to lead the transition to a low-carbon economy, and does this by applying criteria of quality and innovation processes to all its projects with a view to optimizing the efficient use of resources and caring for the environment. With a track record covering almost 58 years, ENAMI is the Chilean state-owned company charged with fostering the sustainable development of small and medium-sized mining companies. To do this, it offers prospection services on mining resources, technical and financial assistance, purchasing, processing and marketing. Smaller-scale mining companies can thus enter the international refined metals marked on a competitive basis, something they could not do on their own.

A recent evaluation of the impact of the activity of ENAMI showed that its overall impact on the Chilean economy in the period covering 2008–2015 rose to US$ 39,615 million. That same study on the social evaluation of the company demonstrated that over the last 8 years ENAMI’s activity has meant a contribution of over US$ 1,700 million to the country. www.enami.cl