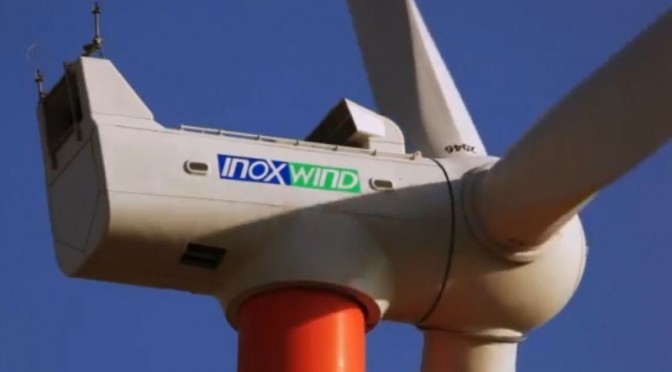 In comparison, the country added 5.4 GW of wind power capacity on the ground in the last financial year that ended in March 2017.

Inox Wind had in October won one-fourth of the total capacity of 1,000 MW that was auctioned by Solar Energy Corporation of India as part of its second mega wind power auction.

The first round, of 1,000 MW, was held in February this year. At the time, tariffs had fallen to 3.46 per kWh, while they declined further to Rs 2.65 in the October auction.

Inox said it expects three more mega auctions of 1500 MW each to be conducted by SECI –the nodal agency for developing large-scale, grid-connected renewable projects in India – by March.

At the beginning of the financial year, it was widely expected that SECI would give 4 GW of wind power under auction this year.

The auctions are conducted in a reverse bidding manner in which contracts to build the farms are awarded to those companies who promise to supply electricity at the cheapest rates to the government controlled utilities.

Inox Wind has a business model in which it wins as many contracts as possible, and then uses its inhouse manufacturing facilties for turbines and generators to put up these wind farms quickly. It plans to sell the finished farms to other companies.

The industry used to be paid by the government based on how much investment has been done.

However, this was changed this year to compensation on the basis of how much energy is produced. This led to a sharp dip in the number of wind turbines being put up as companies no longer had an immediate payback in place.

This affected players like Inox Wind, who had set up large manufacturing capacity for wind turbines and so on. However, it said, the market will pick up soon.

In addition to SECI, said Inox, the Gujarat government is also planning a 500 MW auction this month.

Besides this, public sector companies are expected to order over 700 MW. Meanwhile, it said, states that haven’t yet got into action are expected to come up with auction guidelines by March.

“In our view, the wind power sector is entering the final phase of its journey to a complete auction based regime,” it said.

“We look forward to participating and winning in the upcoming SECI and state auctions.”

“We see the wind industry to be in the last phase of transition to a complete auction based regime. We expect normalisation, from an order inflow perspective, to commence from Q3 (October-December 2017) onwards, and execution to pickup from Q4 onwards,” he added.
Trisha Thomas