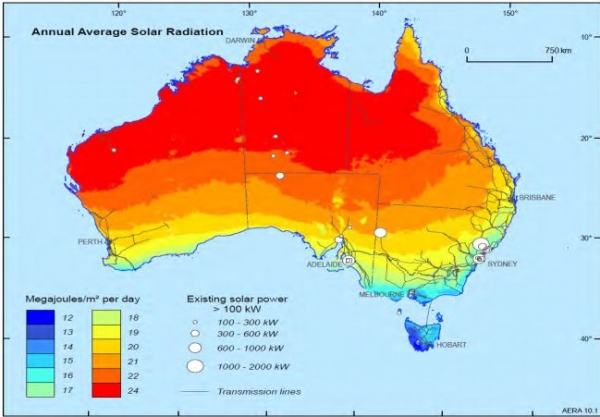 Mr Weatherill said the Aurora Solar Energy Project would be ready to go in 2020 and would supply 100 per cent of the State Government’s needs.

The Government will pay a maximum of $78 per megawatt hour.

Mr Weatherill said the solar thermal plant was “the biggest of its kind in the world”.

“Importantly, this project will deliver more than 700 jobs, with requirements for local workers,” he said.

In September 2016, the Government launched a tender process to procure 75 per cent of its long-term power supply.

It said it wanted to attract a new competitor onto the market and put downward pressure on electricity prices.

The Government contract with United States operator Solar Reserve will last for 20 years, and was the “lowest cost option” of shortlisted bids for the project.

The maximum Government load is 125MW, meaning the plant will be able to supply other customers.

SolarReserve has signed a long-term Generation Project Agreement (GPA) to build a 150 megawatt solar thermal power station with 8 hours of energy storage near the town of Port Augusta, South Australia. The GPA with the State Government of South Australia was signed today at a ceremony with Jay Weatherill, Premier of South Australia, and Energy Minister Tom Koutsantonis.

“The Port Augusta story is a stark example of the transition of the South Australian economy, with the closure of a dirty coal fired power station, and now the commissioning of this world leading renewable energy project,” said South Australia’s Premier Jay Weatherill.

Providing Power When It’s Needed Most

The first of its kind in Australia, the Aurora Solar Energy Project will utilise SolarReserve’s leading solar thermal technology with integrated molten salt energy storage. With a massive 1,100 megawatt-hours of energy storage capability, Aurora will be the largest project of its kind in the world, designed to meet the South Australian Government’s annual electricity consumption.

The Generation Project Agreement is similar to a Power Purchase Agreement for renewable energy, except that emphasis is placed on the available capacity of the facility during peak demand periods rather than just the energy that can be delivered in kilowatt-hours. Aurora will deliver power into the National Electricity Market (NEM) at high value electricity periods, providing additional capacity, energy security and reliability services, as well as competition into the South Australian market.

“SolarReserve’s energy storage technology is an excellent fit for the South Australian electricity system,” said SolarReserve’s CEO Kevin Smith. “Aurora will provide much needed capacity and firm energy delivery into the South Australian market to reduce price volatility. SolarReserve looks forward to continuing to work with the South Australian government and stakeholders, including the Port Augusta community where the project is located, to support Federal and State renewable energy targets, stimulate long-term economic development, and create new jobs and businesses.”

Because a solar thermal power station operates like a conventional coal or gas power station, many of the jobs require the same skill sets as conventional energy jobs – from its construction phase through to operations. Aurora is an example of how sustainable solutions are able to foster new industries and create new jobs for South Australia:

As part of this transformative project, SolarReserve will be establishing a research partnership with South Australian universities to advance solar thermal research and education in South Australia.

“The Aurora project brings the most advanced power generation technology to South Australia, supporting its energy security and carbon reduction objectives,” said Tom Georgis, SolarReserve’s Senior Vice President of Development for SolarReserve. “It also represents a significant opportunity for South Australian workers and businesses to participate in this exciting project.” SolarReserve is a leading global developer, owner and operator of utility-scale solar power projects, with more than $1.8 billion of projects in operation worldwide. The company has commercialised its proprietary ThermaVault™ advanced solar thermal technology with integrated molten salt energy storage that delivers renewable energy that is dispatchable 24/7. The technology is now one of the world’s leading energy storage technologies, and allows solar energy to operate like traditional fossil-fired and nuclear electricity generation – except the fuel is the sun which means zero emissions, zero hazardous waste, and zero dependence on fuel price volatility.

Since the company’s formation in early 2008, SolarReserve’s experienced team has assembled a pipeline of over 13 gigawatts across the world’s most attractive, high growth renewable energy markets. SolarReserve is headquartered in the US, and maintains a global presence with seven international offices to support widespread project development activities across more than 20 countries. The company currently has an office in Perth, and will be opening its permanent Australian headquarters in Adelaide by the end of 2017.