America’s wind power workforce installed 908 utility-scale turbines in the first quarter of 2017, totaling 2,000 megawatts (MW) of capacity. This is the wind industry’s strongest start in eight years, according to a new report released today by the American Wind Energy Association (AWEA).

“We switched on more megawatts in the first quarter than in the first three quarters of last year combined,” said Tom Kiernan, CEO of AWEA, in releasing the U.S. Wind Industry First Quarter 2017 Market Report. “Each new modern wind turbine supports 44 years of full-time employment over its lifespan, so the turbines we installed in just these three months represent nearly 40,000 job years for American workers.” 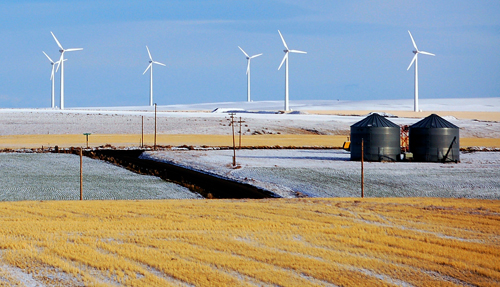 The early burst of activity reflects how 500 factories in America’s wind power supply chain and over 100,000 wind workers are putting stable, multi-year federal policy to work. The industry is now in year 3 of a 5-year phase-down of the Production Tax Credit, and Navigant Consulting recently forecast a strong 2017 for wind power, similar to 2015 and 2016.

Texas continues as the overall national leader for wind power capacity, with 21,000 MW installed, enough to power more than 5 million average homes. North Carolina became the 41st state to harness wind power, bringing online the first wind farm to be built in the Southeast in 12 years.

Horace Pritchard, one of nearly 60 landowners associated with the North Carolina project explained what it means to him and his neighbors, “Farms have been growing corn, soybeans, and wheat for a long time here, and the wind farm revenue means a lot of families are protected from pricing swings, floods or droughts going forward. We’re just adding another locally-grown crop to our fields, with very little ground taken out of production, and the improved roads really help with access. So it’s a great fit here.”

Expanding wind farms continue to benefit rural America, since over 99 percent of wind farms are built in rural communities. According to AWEA’s recently released 2016 Annual Market Report, wind now pays over $245 million per year in land-lease payments to local landowners, many of them farmers and ranchers.

Along with rural benefits, American wind manufacturing facilities remain busy in the first quarter as projects continue to be built. With 4,466 MW in new construction and advanced development announcements recorded in the first quarter, the near-term pipeline has reached 20,977 MW of wind capacity. That’s about as much as the entire Texas wind fleet’s existing capacity.

Demand remained strong in the first quarter. There were 1,781 MW signed in long-term contracts for wind energy, the most in a first quarter since 2013. Utilities and Fortune 500 brands frequently use these long-term contracts, called Power Purchase Agreements (PPAs), to purchase wind energy. Home Depot and Intuit, maker of TurboTax, both signed up for wind power this quarter, joining a host of Fortune 500 companies like GM, Walmart, and Microsoft that are buying wind energy for its low, stable cost.

In addition to leading brands, low-cost wind power reliably supplies a growing number of cities, universities, and other organizations – including the Department of Defense. This quarter, a Texas wind farm came online to supply a PPA with the U.S. Army. Powering a military facility demonstrates that wind power is ready to reliably serve our most vital electricity needs, boosting American energy security in more ways than one.

The trends highlighted in this year’s annual market report will be on full display from May 22-26 in Anaheim, Calif., at AWEA’s WINDPOWER Conference and Exhibition, the U.S. industry’s largest annual gathering. The event brings together industry leaders from all 50 states and around the world to demonstrate new technology and new approaches, and to make deals that shape wind energy for the following year.