2015 was another remarkable year for wind energy in Canada. The Canadian Wind Energy Association (CanWEA) is pleased to report that Canada closed 2015 seventh in the world for total installed wind energy capacity with 11,205 MW, and sixth in the world for the amount of capacity added in 2015. Over the year, Canada added 1,506 MW of new wind capacity through the commissioning of 36 projects, 23 of which involved Aboriginal Peoples, municipal or local ownership. Wind energy supplied approximately five per cent of Canada’s electricity demand in 2015, enough to power over three million Canadian homes. 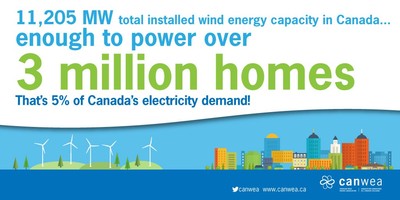 “Not only has the wind energy industry continued its five year trend as the largest source of new electricity generation in Canada,” said CanWEA president Robert Hornung, “the industry in Canada has demonstrated a five year annual average growth rate of 23 per cent per year (an average of 1,438 MW per year).”

Ontario continued to lead the way in market size and growth, adding 871 MW of installed capacity in 2015 for a new total of 4,361 MW. Between contracts signed and planned new purchases through the province’s new Large Renewable Procurement process, there remains more than 2,000 MW of wind slated to be built in Ontario in the next few years.

Nova Scotia, which currently has 552 MW, commissioned 186 MW in 2015, including one of the largest municipal-owned wind projects in Canada (Sable Wind Farm, 14 MW), bringing the total installed capacity in Atlantic Canada to 1,104 MW (New Brunswick 294 MW, Prince Edward Island 204 MW, Newfoundland 55 MW). Notably, Prince Edward Island currently gets about 40 per cent of its electricity supply from wind energy and Nova Scotia gets close to 10 per cent from wind energy.

Alberta, which is Canada’s third largest wind energy market at 1,500 MW, added 29 MW in 2015. More remarkable was the commitment in November by the province to replace two-thirds of coal generation with renewable generation which is expected to increase installed wind energy capacity in Alberta by thousands of megawatts over the next 15 years.

British Columbia held steady in 2015 at 489 MW of installed wind energy capacity, as did Manitoba with 258 MW, the Northwest Territories at 9 MW, and Yukon with just under 1 MW.

With the cost of utility-scale wind plummeting 60 per cent over the past six years, as reported in November by U.S. investment bank Lazard, wind energy is now cost-competitive with virtually every other potential source of new electricity generation. That downward trajectory is expected to continue, while the costs of wind energy’s main competitor, natural gas, are exposed to both future carbon and commodity price risk.

“As we look ahead in Canada, we expect at least another 1,000 MW to be installed by the end of 2016,” said Hornung. “The recent policy decisions in Alberta and Saskatchewan provide clear evidence that wind energy’s growth prospects will remain strong beyond then as well.”